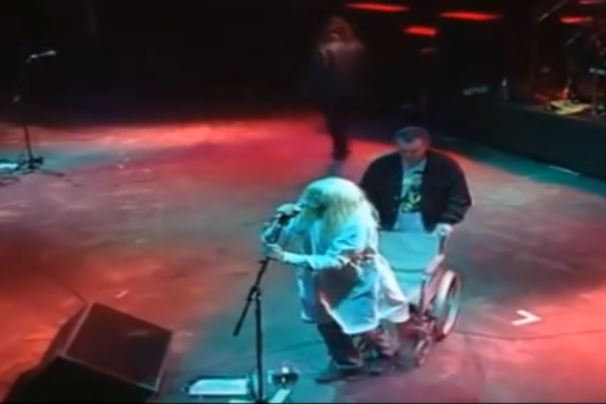 The hospital gown adorned by Kurt Cobain during Nirvana’s iconic Reading Festival has gone up for auction. The garment is anticipated to sell for more than €46,000.

During the 1992 headline set Cobain was famously pushed on to the stage in the gown while sitting in a wheelchair.

The gig went down in history as one of Reading’s most notable performances. As rumours of ill health and drug abuse circulated around Cobain, the singer was wheeled on before launching into a rather raucous version of ‘Breed’.

According to US auction house RR Auctions via the NME, the gown is an  “iconic and museum-quality piece [that] represents the Nirvana frontman at his finest and most sardonic, jabbing pointedly at critics and detractors alike while retaining the intensely original showmanship that made him a living legend.”

In 2018 Nirvana drummer, Dave Grohl talked about the “genuinely magical moment” of headlining the festival for the band’s first time. Grohl spoke about expectations that the band would cancel the show:

“I remember showing up to Reading ’92 and there being so many rumours that we weren’t going to play, that we had cancelled. I walked backstage and some of my best friends in bands that were opening would see me and say, ‘What are you doing here?’ And I’d go, ‘We’re fucking headlining!’ And they’d be like, ‘You’re actually going to play?!’

Grohl also admitted that the gig was bittersweet, “The show was a really reassuring, genuinely magical moment of everything coming together at the right time. The memory is somewhat triumphant but melancholy because we never came back.”The show would prove to be Nirvana’s last in the UK before Cobain’s untimely suicide in 1994.

A quarter of a century after Cobain’s death, a super-fan has placed the gown up for sale. According to reports, the fan received the gown from his widow Courtney Love, when they attended a vigil in his memory