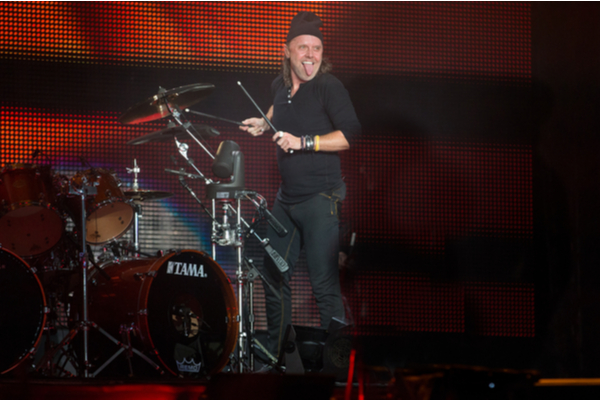 Chris Jericho thinks Lars Ulrich is the Ringo Starr of the heavy metal genre as he always “plays what’s best for the song”. The Fozzy frontman defended Lars’ playing style and said he is a huge fan of the Metallica drummer.

In a recent interview with Metallica-related podcast …And Podcast For All!, the singer/”wrestler” revealed why he thinks the comparisons are made. Jericho said people like to “bag on Lars” because it is funny to do, “just the same way that people bag on Ringo; it’s funny to bag on Ringo”.

“Lars is now the Ringo of heavy metal,” declared Jericho. “And what I mean by that is that Ringo plays what’s best for the song [and] not what the most flashy part is, not what is gonna get him on the cover of Modern Drummer [magazine]. He plays what’s right for the tune. And that’s why Lars is great.”

Jericho feels Lars was very influential back in the early days of Metallica, until the band’s …And Justice For All’ album. However, he feels the drummer may have hit a crossroads of such by then, choosing to follow AC/DC’s Phil Rudd and Iron Maiden’s Clive Burr, rather than competing with Charlie Benante [Anthrax], or Slayer’s Dave Lombardo. Jericho also revealed that Lars “loves Clive Burr of Iron Maiden, which is why most of his fills are just on the snare. I said, ‘Why do you do that?’ He said, ‘Clive Burr.’ And I’m, like, ‘Ahhh.’ Clive Burr rarely uses toms too.”

“I’m a big fan of Lars’s playing. Listen, is he always completely in time? Does he speed up and slow down live? Well, he does, but guess what? That’s f****** live rock and roll, man. And a lot of people hate it, and I get it. Listen, if you’re going to Metallica and you’re worried because the tempo increases or decreases sometimes, you’re probably not there for the same reason that I am”.

Last year, Lars defended Metallica’s ’03 album, St Anger, which came in for some criticism by fans, for his lack of guitar solos, extended riffs and the thin drum sound. During an interview on SiriusXm’s TrunkNation with Eddie Trunk, Ulrich was asked if he stands behind the LP’s much-maligned snare sound.

“I stand behind it a hundred percent, because at that moment, that was the truth,” declared Lars. “Just my personality, I’m always just looking ahead, always thinking about the next thing. That’s just how I’m wired”.