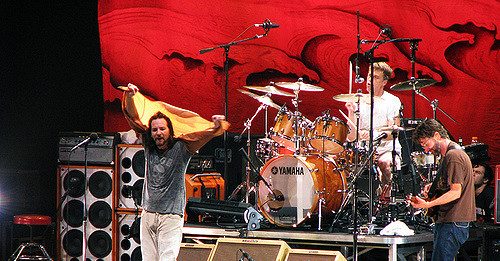 Inductees were chosen by more than 900 voters, as well as the aggregate results of the Rock & Roll Hall of Fame’s online fan vote.

6 artists from the ballot including Pearl Jam and Tupac Shakur are included in the Performer Category and 1 individual is recognized with an Award for Musical Excellence.

It was announced yesterday (April 5th) that there’s been a last minute change and David Letterman will step in to induct Pearl Jam into the Rock and Roll Hall of Fame host, filling in for Neil Young.

The retired Late Show host is a fitting substitute; Letterman’s Late Show was a favorite late-night venue for Pearl Jam, who performed at the Ed Sullivan Theatre seven times. Eddie Vedder also performed as a solo artist on Late Show. In 2006, the band played a 10-song set for the Late Show audience.

Letterman’s been a fan from the beginning, the band’s first Late Show visit occurred in September 1996 with a run-through of No Code’s “Hail Hail.” “This is a big thrill for me,” Letterman told the band after finally recruiting them to appear on the show.

When they released their debut album, Ten, in August, 1991, Pearl Jam were a band of young unknowns to anyone not from Seattle, Washington.

Propelled by the hits “Alive” and “Jeremy”, Ten sold over 13 million copies in America, launching their enduring commercial success. Their success continued with ten Top Five studio albums with half of them reaching #1.