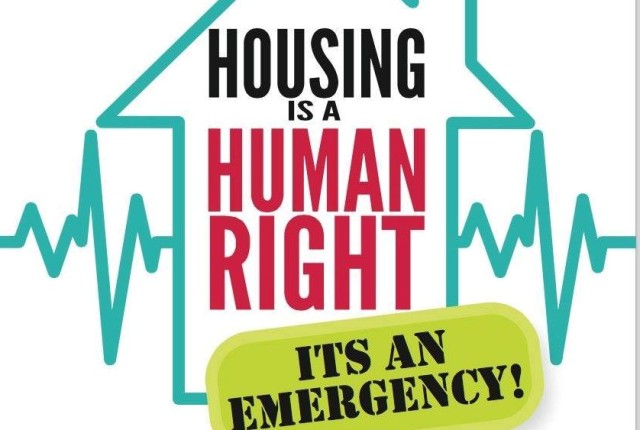 Representatives from the National Homeless and Housing Coalition which includes community housing action groups, housing charities, trade unions and political parties all urged the government to implement policy objectives aimed at providing a real and meaningful solution to the housing crisis.

The National Homeless and Housing Coalition also called on people to join them in a national demonstration, which will protest the housing crisis and on Saturday 7th April 2018.

Speaking from today’s event, Councillor Tina MacVeigh, a convenor of the NHHC speaking on behalf of the political groups involved said: ‘We are today declaring a vote of no confidence in the housing policies of this government and their ability to deal effectively and with the urgency required to address the housing crisis. We demand a public, local authority led solution and we demand it now. We are calling on people who are outraged at record numbers of homeless, outraged at the number of people sleeping on the streets, people living in overcrowded or sub-standard accommodation, under constant threat of eviction, in mortgage arrears, paying obscenely high rents, anyone and everyone affected or outraged by this crisis to join us in a mass mobilisation in the Spring.’

Father Peter McVerry added: ‘The homeless and housing situation is now out of control. People are beginning to feel hopeless. Even working people don’t have the money to pay the rents being demanded. The solution is obvious, the provision of public housing. And there are two ways to do that – build public housing at the same rate as the 1970s, use the empty houses and apartments even before the new dwellings can be built. The emphasis on the private sector is absurd. We have to get political as well as providing services to the homeless. We need all the relevant and concerned organisations to come together in a united front to address this terrible emergency’.

Speaking on behalf of the Trade Unions Patrick Bolger, President, Dublin Council of Trade Unions stated: ‘Many of the steps needed to tackle the housing and homelessness crisis are obvious, well known and almost everyone seems to agree with them.

There must be a serious step up in the provision of housing, especially by construction, by the use and refurbishment of empty dwellings, with the objective of 10,000 a year. Local authority land zoned for housing should be used without delay to build public housing for affordable rent.’

Aisling Hedderman of Dublin Bay North Housing Crisis said: ”Every day in our areas we see more and more people forced into homelessness or overcrowding. All around us are neighbours who stand no chance of affordable public housing. We have attended the conferences, held local events, and lobbied the government. It is time to come out in great numbers and demand housing as a right.”

The announcement comes as the #Mynameis campaign held a concert on Dublin’s Molesworth Street to highlight the crisis. It featured Glen Hansard, Frances Black and Emmet Kirwan among others.

No Covid Related Deaths Recorded Along With 11 New Cases