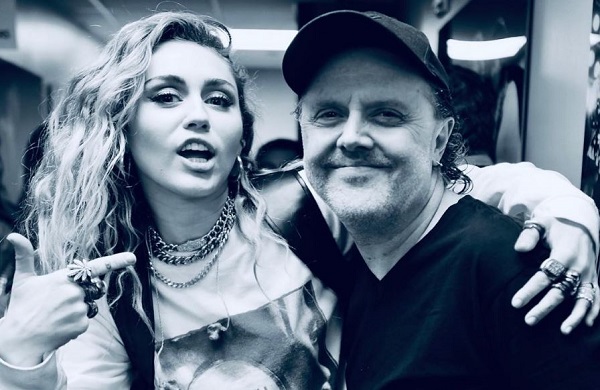 Miley Cyrus treated audiences to a set packed with covers on the final night of Glastonbury.

The singer covered Metallica’s “Nothing Else Matters” and Nine Inch Nails’ “Head Like a Hole.”

According to Setlist via UCR, Cyrus incorporated Led Zeppelin’s “Black Dog” into “Mother’s Daughter,”  and performed a rendition of Dolly Parton’s  “Jolene.”

Check out the audio of “Nothing Else Matters” and a there’s a clip her cover of NIN’s “Head Like a Hole” below.

Metallica headlined Glastonbury in 2014, which caused some controversy in the U.K. Mainly because they are a metal band and singer James Hetfield’s passion for hunting.

Despite a petition to get the rockers off the bill, Metallica rocker the legendary festival. The band screened a tongue in cheek short introductory film and a T-shirt that poking fun at the controversy.

According to Metal Hammer Cyrus and Metallica skinner, Lars Ulrich were snapped together at a Chris Cornell tribute concert a few months back.

Miley, still stunned by your next level version of “Say Hello 2 Heaven” for Chris! Beyond inspiring…🙏 #IAmTheHighway 📸 by @rosshalfin