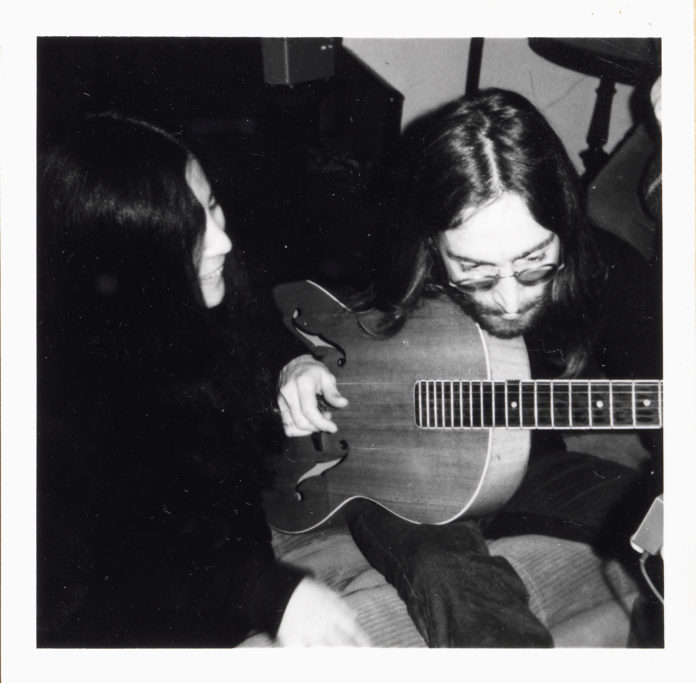 A never before published cassette tape containing an interview and un-released song “Radio Peace” with John Lennon and Yoko Ono is soon going under the hammer in Denmark.

The 33-minute-long recording includes a conversation between the famous couple and four 16-year-old schoolboys, who were allowed to interview Lennon and Ono while they were on a winter stay in Thy, Northern Jutland in 1970.

SCROLL DOWN TO Listen to audio From the cassette tape

“This is the first time ever that an interview by John Lennon and his wife Yoko Ono is up for Live Auction, and we expect a great interest in the collector’s item,“ says Alexandra Nilsson, valuation specialist at Bruun Rasmussen Auctioneers. “For me personally, it has been surprisingly moving to hear Lennon’s voice. It feels incredibly present and not as if it was recorded 50 years ago. Unfortunately, his message about world peace is still very necessary and one can only imagine that today he would be spreading the same message if he were alive.”

The cassette tape is accompanied by a series of photographs from the interview, which were taken by one of the four boys present, Jesper Jungersen. In the images you can see John Lennon and Yoko Ono sitting and relaxing on a sofa wearing wool socks and with their feet on the coffee table together with Yoko Ono’s five-year-old daughter Kyoko.

The reason for the famous couple’s visit to Denmark was a family dispute over Yoko Ono’s five-year-old daughter Kyoko, whom she had with filmmaker Anthony Cox. He had moved to Denmark with his daughter, and the hope was to reach a settlement with him concerning custody. John Lennon and Yoko Ono stayed for more than a month on an isolated farm in the village of Vust and were affiliated with the experimental “Æ Verdensuniversitet” in Skyum Bjerge. John Lennon and Yoko Ono managed to stay under the radar of the press for six days, but the rumours began to spread, and the local Fjerritslev newspaper outed them before too long. Journalists from all over the world travelled to Thy in Northern Jutland in the hope of getting close to the two world-famous people. The couple agreed to hold one official press conference for all the journalists.

In this connection, the four 16-year-old classmates had an experience they would remember for the rest of their lives. They managed to persuade the principal at Skovgårdsskolen near the town of Brovst to let them skip their schoolwork to interview John Lennon. When they read in the newspaper that John Lennon and Yoko Ono were in Northern Jutland, they devised a plan. The boys borrowed recording equipment from the local radio dealer, and a local truck driver drove them to the vicarage in Kettrup, where the two world stars held a press conference on Monday 5 January 1970.

When the boys arrived at the place of the event, they were greeted by a small note on the door with the message that the press conference had been moved to “Æ Verdensuniversitetet” (New Experimental College) in the hilly terrain of Skyum Bjerge 70 km away. In a blizzard, the four boys drove towards the place, but upon arrival, the press conference was over. They tried their luck and knocked on the door, and luckily, they managed to get in and meet their idols together with a handful of journalists who, due to the rough weather, had also arrived too late.

The Recording Was Placed in a Bank Vault

The unique recording on the tape makes it clear that there was a good chemistry from the start between the schoolboys and the famous couple – the conversation is surprisingly informal and relaxed, and everything from hair length and friendships to visions of peace and generational divides is discussed. At one point, one of the schoolboys, Karsten Højen, asks how a Danish school student can support the peace campaign. The answer was simple – they had to work locally for peace with posters and happenings promoting the peace message.

During the interview session, the small exclusive party even dances around a Christmas tree, and John Lennon and Yoko Ono can be heard humming along to Danish Christmas songs. At one point, John Lennon plays the guitar and sings “Give Peace a Chance” and the unreleased song “Radio Peace”.

“The experience had a great impact on our lives. Back then, we were not as preoccupied with fame and famous people as young people are today. Instead, we saw John Lennon and Yoko Ono as political prophets and symbols of peace. We shared a common destiny with them in relation to music and the progressive ideology of peace. The two celebrities shaped our generation and the entire counter-culture movement,” says the now 68-year-old Karsten Højen, who together with his friends has now placed the cassette tape and photographs up for auction.

The friends have since 2002 kept the cassette tape in a safe deposit box when they learned that it was of some value.

“The whole session on 5 January 1970 was a great experience for all four of us and became a fond memory. But at that age, a lot happens in one’s life – all four of us split up after completing our education at Skovsgårdskolen, and our shared experience slipped a little into the background of our memories. Now we are all quite a bit older – and tapes and pictures do not have as great a value for our children and grandchildren. Therefore, we decided that it should be sold at auction to someone else who will appreciate it,“ says Karsten Højen.