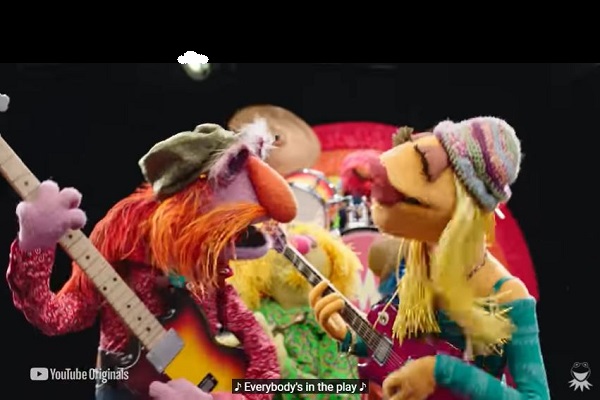 Classic, ensemble cast of puppet characters, The Muppets continue their long-running connection to classic hits, with a cover of ELO’s, Mr. Blue Sky. Performed by the lovable, and sometimes crazy house band, Jeff Lynne’s 1977 classic is almost played out to perfection.

To coincide with the cover, members of the Muppets house band released a video for their performance of Lynne’s track. The band play the classic track on set before being whisked away on clouds to singing, dancing flowers. Also included in the song is an impressive talk-box solo from Zoot, the blue-haired saxophonist voiced by Dave Goelz.

According to Ultimate Classic Rock, Lynne’s hit track burst onto the scene via the group’s 1977 album, Out of the Blue, which peaked at No. 4 in both the US, and the UK. Mr. Blue Sky, too, scored high on the charts, reaching No.6 in the UK, No. 35 in the US, and has been certified triple platinum by the RIAA.

The inspiration for Mr. Blue Sky came to Jeff Lynne’s musical genius while writing Out of the Blue in a remote chalet in the Swiss alps. When speaking in a 2016 interview with Rolling Stone, the producer said, “I remember writing the words down”.

“I was at a chalet in the mountains of Switzerland, and it was all misty and cloudy all the way around,” Lynne shared. “I didn’t see any countryside for the first four days or so, and then everything cleared and there was this enormous view forever, and the sky was blue.”

Although The Muppet Show has had numerous high-profile rock star moments over its 45-year history, the talented Lynne has never made an appearance at the Benny Vandergast Memorial Theatre. However, many huge and talented stars performed on The Muppets such as Elton John, Prince, Alice Cooper, Johnny Cash, Dave Grohl and Ozzy Osbourne, just to name a few.

Catch new and classic episodes of The Muppets on Disney+.

Misfits Guitar Legend ‘Doyle’ Set For The Bowery This July!