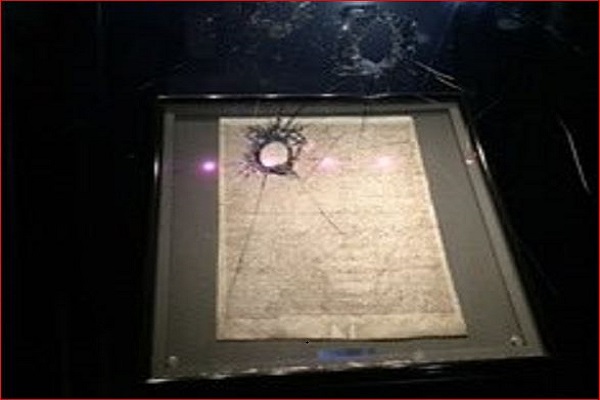 A man has been arrested by British police after allegedly trying to steal the Magna Carta from its display case at Salisbury Cathedral. Wiltshire Police confirmed that the cathedral alarms sounded on Thursday afternoon when the suspect attempted to smash the glass box containing the Magna Carta.

The Magna Carta was granted by King John back in 1215 and has become a long-standing symbol of the rule of law. The historic document on display at Salisbury Cathedral is one of only four surviving original Magna Cartas. Police said that the ancient manuscript, was not damaged and no one was injured during the incident.

In a written statement, the cathedral said that its copy of the Magna Carta, considered a foundation of modern democracy would be back on display as soon as possible. According to ABC news, the Magna Carta established for the first time that neither monarch nor government was above the law and set out principles of liberty which echoed through the centuries.

The copy in Salisbury Cathedral was written immediately after the rights were formally agreed.
The document has served as the basis of the U.S. Constitution, the Bill of Rights and the Universal Declaration of Human Rights.

The suspect was arrested on suspicion of attempted theft, possession of an offensive weapon and criminal damage. He has not been identified or charged.

WIltshire police have arrested a man for attempting to steal Magna Carta from Salisbury Cathedral. https://t.co/7J7klyMWMS

BREAKING: A witness told the Journal someone tried to smash the Magna Carta case and destroy it with a hammer. Salisbury Cathedral was evacuated after someone set off the fire alarm.https://t.co/TzSgkmwknB