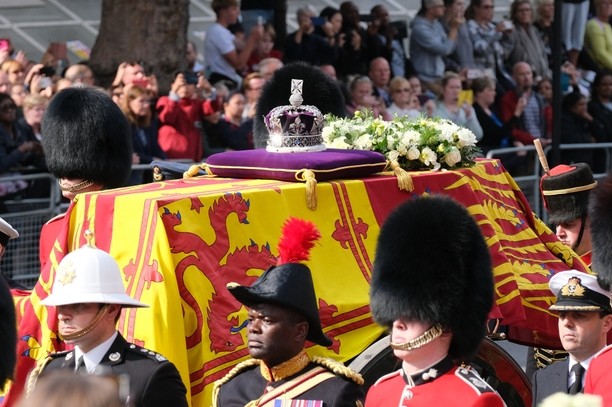 A man has been detained by police after a witness said he “ran up to the Queen’s coffin” in Westminster Hall in London.

Police said the sombre mood was disrupted last night, and the live feed from inside the hall cut away for a brief period.

The UK’S Metropolitan Police said: “Around 10pm on Friday 16 September, officers from the Met’s Parliamentary and Diplomatic Protection Command detained a man in Westminster Hall following a disturbance.

“He was arrested for an offence under the Public Order Act and is currently in custody.”

A UK parliament spokesman said: “We’re aware of an incident in Westminster Hall, in which a member of the public moved out of the queue and towards the catafalque.

“They have now been removed from the hall and the queue restarted with minimal disruption.”

It comes after a 19 year old man allegedly exposed himself and pushed into mourners from behind as they waited in the line at Victoria Tower Gardens on Wednesday.

Adio Adeshine was remanded in custody on Friday after appearing at Westminster Magistrates’ Court charged with two counts of sexual assault and two counts of breaching a sexual harm prevention order.

A huge amount of planning for security arrangements has gone into the preparations for the lying in state, given the heightened risk of terrorist attacks due to the large crowds who have gathered in central London.

Meanwhile Prince Harry and his wife Meghan Markle have reportedly been “uninvited” to a state reception in London hosted by King Charles III on Sunday night.

The Duke and Duchess of Sussex are said to have received an invitation earlier this week to the event on Sunday at Buckingham Palace ahead of the Queen’s state funeral on Monday at Westminster Hall.

Palace officials have now insisted the event is for working members of the royal family only.

Ireland To Directly Contribute To Wonderful Vaccine Roll Out In Jobs...