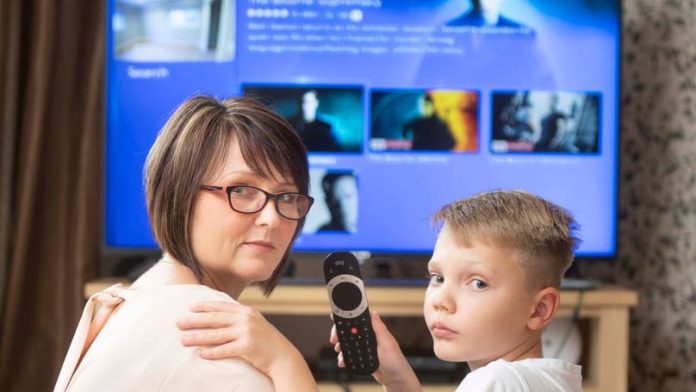 Dawn Pearse said she was shocked when she made the voice request into the remote to ask for Bourne films for her ten-year-old son Alex.

Ms Pearse was horrified only to see a list of adult-rated films appear at the bottom of the menu instead.

Dawn, aged 42, had to swiftly get up from the sofa and attempt to block the 48-inch screen. At the same time, she tried to remove the search. This all happening while Alex was sat there wondering what was going on.

According to Ladbible,  Her misheard request for Bourne films brought back a number of saucy flicks.

“One of the films had a rear-shot of a woman in just her knickers standing in front of a desk and I spotted the one about Linda Lovelace.I panicked and jumped up. Alex got a little irate as he didn’t know what was going on. He asked me, ‘Mum, what are you doing?’

Thankfully, everything turned out ok as Alex seeing anything he shouldn’t have and did end up seeing one of the Bourne films – turns out he’s a fan.

Dawn concluded: “We did eventually watch the first Bourne film, The Bourne Identity, and Alex loved it.”

They expected Matt Damon but got something very different. 🙈https://t.co/FbD0PDY9PC