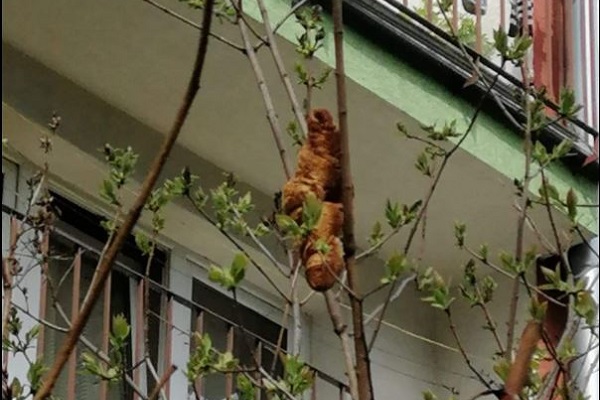 A mysterious beast lurking in a tree was reported in Krakow this week, with people too “afraid” to open their windows. Upon further inspection by animal protection services, the beast turned out to be none other, than a croissant!

A worried resident contacted a local animal protection agency, reporting a mysterious creature lurking in a tree for two days. Krakowskie Towarzystwo Opieki nad Zwierzętami, which runs Krakow’s main animal shelter, report that a “desperate” woman called their office. They say the woman was distressed and claimed residents keep their windows closed in fear of the creature.

The organisation said its officers had asked the desperate caller whether the mysterious creature could be a bird of prey. The woman responded that it looked more like a “lagun” – Polish for lagoon – before remembering the correct word “legwan”, or iguana. The resident said, “everyone is scared of it” and people are “not opening their windows because they are afraid it will come into their home”.

Although knowing reptiles would find it difficult to survive the cool spring temperatures in the south Polish city, KTOS wondered if it could have been an abandoned, unwanted pet. The organisation deployed a team to check on the mysterious creature as they assumed that if it were a tropical reptile, it could have died, remaining motionless in the tree.

As the team arrived at the scene, they spotted the “creature” and its “brown skin glistening in the sun”. However, upon further inspection, the team found that the object appeared to be headless and without limbs. When “we looked more closely, the poor thing had no legs or head. We knew already that we could not help the creature,” wrote KTOZ on Facebook. “The mysterious iguana turned out to be…a croissant.” The team believed the pastry could have probably been thrown out of a window to feed birds.

Assuring the authenticity of the story, the organisation added that it still encourages people to contact them about an animal’s wellbeing, no matter how mysterious! “It is better to check and be pleasantly disappointed – sometimes (unfortunately very rarely) to laugh – than not to react.”