Home Music News Nandi Bushell Is Back With Another Drum Cover: The Who, My Generation 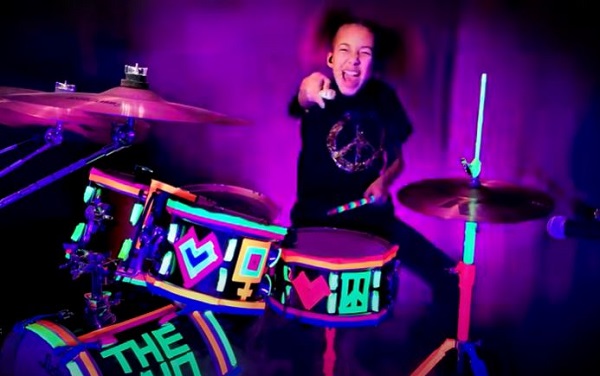 Young drummer Nandi Bushell is back again with another cover, and this time it is The Who’s ‘My Generation’. Nandi honours the band’s late drummer Keith Moon with this epic cover.

At the start of the video, Nandi dedicates her performance to “Mooney”, before delving right into the track. On her social media page, Bushell described the track as “one of the most difficult covers I have ever made. I think this song really suits my style. Fast, Fun and Rocking with a Punk edge!”

The latest video follows a list of other covers Nandi has taken on. She recently performed drum lines for songs by Coldplay, My Chemical Romance, Led Zeppelin, Blur and Slipknot, while also going viral for her cover of Nirvana’s In Bloom.

Just last year, Nandi locked horns with Foo Fighters frontman, Dave Grohl in a number of epic drum battles. The then 10-year-old challenged Grohl after her cover of the band’s track Everlong. After a series of back-and-forth challenges between the pair, Grohl conceded the battle and declared Nandi the winner.

“She’s beating the crap out of her drum set, and when she does drum rolls, she screams,” Grohl said od Nandi on The Late Show with Stephen Colbert. “I was like, oh my God, this kid is a force of nature. I was literally being called out by the school bully – ‘I’ll see you on the playground after school!’ Every time she would put out these videos on her page, I’d be like, oh my God, I’m gonna get my ass kicked again.”

Foo Fighters are not the only act who have responded to Nandi’s videos. Following her cover of Muse’ Hysteria, the band said she “absolutely killed it again”.

You can check out Nandi in action with her take on The Who’s ‘My Generation’ in the video below.