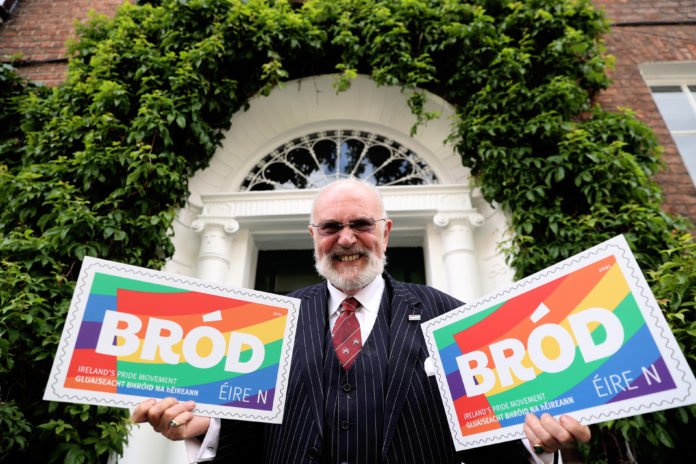 An Post worked closely with representatives of the LGBT+ community in planning for the stamps which were designed by Dublin company, Unthink.

The Pride flag was originally designed by American artist and activist Gilbert Baker in 1978 to represent the diverse LGBT community.

We love this image Taoiseach @MichealMartinTD and @PantiBliss show off our new #SeolBród stamp celebrating Ireland's Pride movement A portion of stamp sales will go to @LGBT_ie and @BeLonG_To pic.twitter.com/0UwAV2LYxJ

An Post CEO David McRedmond said, “We are delighted to join with our staff and customers in celebrating Bród and the Irish Pride Movement.  An Post worked closely with LGBT+ representatives in planning these colourful and symbolic new stamps which mean so much to Irish people at home and across the world.”

Two national LGBT support groups, BeLonG To and LGBT Ireland, will benefit from the sale of the stamps which

are available from main post offices and online at anpost.com/brod in a special booklet format (€6.40), each containing a mix of four ‘N’ rate Pride and Bród stamps for posting across the island of Ireland and one ‘W’ rate stamp for posting letters worldwide.

An Post is expecting strong demand for the stamps in Ireland and globally as images of the Pride flag flying over the GPO has featured heavily on social media across the world.

Pride lapel pins, t-shirts and framed stamps will also be available for sale.

Pride Month is celebrated in June each year around the world and the first Pride week in Ireland was organised by the National Gay Federation (NGF) in 1979 to commemorate the 10th anniversary of the Stonewall riots and to highlight the community’s persecution in Ireland.

The turning point came in1983 when five men were released after the murder of Declan Flynn in Fairview Park.  That same year saw the first Gay Pride Parade when over 200 people marched from St. Stephen’s Green to the GPO.

It took another 10 years for homosexuality to be decriminalised in Ireland (1993) and another five years for the Employment Equality Act (1998).  The Civil Partnership Act was passed in Ireland in 2010 and in 2015 I0reland became the first country to legalise Same Sex Marriage by a majority of 62%.

The Pride festival has become one of Ireland’s biggest festivals with tens of thousands Irish people and visitors from all over the world taking part in Dublin’s 2019 Pride Parade.

While Covid restrictions wont permit a Dublin Pride Parade in 2021 many events are still happening online.