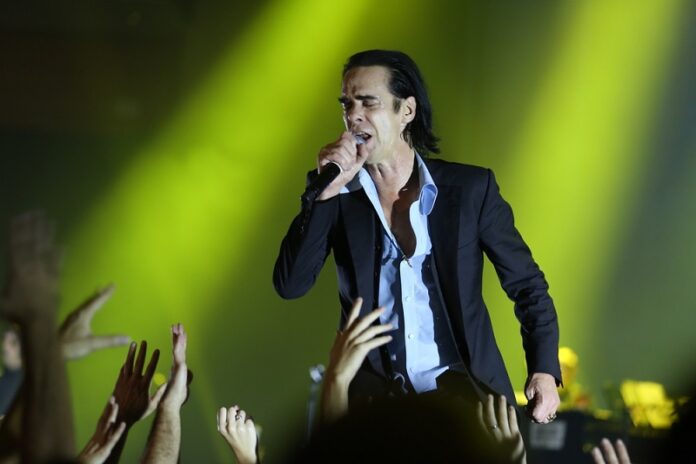 Nick Cave has revealed that he has been working in the studio on a new album entitled ‘Carnage’.

He has collaborated with Bad Seeds member, Warren Ellis on the new album.

In his December dispatch on his website, Cave discussed the “great disappointment” he felt when he cancelled his tour.

“In the end, with so many things about 2021 remaining unpredictable, including no certainty on whether we would be able to deliver the large scale arena show that we wanted to — and in the way that we wanted to — we felt we had to make the decision to cancel, at least for now.”

He went on to add “time to make a record“.

A few weeks later, writing on his red hand files on his website, Nick Cave responded to a fan named Tobias and gave an update about the album and opened up about lockdown.

“In many ways, lockdown has felt weirdly familiar, like I’ve experienced it before. I guess this should come as no surprise as I was a heroin addict for many years and self-isolating and social distancing were the name of the game.”

“I am also well acquainted with the mechanics of grief — collective grief works in an eerily similar way to personal grief, with its dark confusion, deep uncertainty, and loss of control.”

He also discussed how he misses live music.

“I miss the complete surrender to the moment, the loss of self, the physicalness (sic) of it all, the feeding frenzy of communal love, the religion, the glorious exchange of bodily fluids — and The Bad Seeds themselves, of course, in all their reckless splendour, how I miss them. As much as sitting behind my desk can bring me a lot of joy, and the imagination can be a stimulating, even dangerous place, I long for the wanton abandon of the live performance.”

He finished his letter by saying “Anyway, as promised in my last issue, I did go into the studio — with Warren — to make a record. It’s called CARNAGE.”

The new album will be the 18th Nick Cave And The Bad Seeds record. There has been no official announcement on a release date or track list at the time of writing.

Despite the pandemic, Nick Cave was able to play a concert this year. He performed solo at London’s Alexandra Palace. The release was entitled ‘Idiot Prayer’ and was streamed to cinemas. You can watch the trailer below and you can purchase the album here.

Win Tickets To The Eagles All Weekend On NOVA