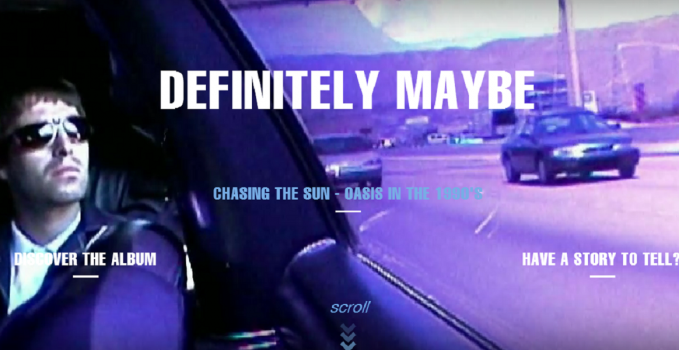 As most of you will probably be aware by now Oasis had posted a cryptic message on their Facebook page teasing an announcement at 9am this morning. Fans were in high hopes as to what the news would be, with most hoping that they would announce a reunion tour, something which Noel has categorically ruled out in the past.

“Maybe people keep thinking if that if they say it, it will eventually happen. It’s not going to happen. Unless they’re doing it without me, but without me it would be rubbish.”

While brother Liam has said he would be interested in:

“burying the hatchet for a lap of honour”

In any case the news was issued this morning that Oasis’s classic 1994 debut album ‘Definitely Maybe’ will be re-issued to mark its 20th anniversary this May. The remastered version of the Manchester band’s album is set to be released on May the 19th and is going to include rare unreleased recordings. This is the first to be released with “Whats The Story Morning Glory”  and also “Be Here Now” to be released later on this year, all coming under the “Chasing The Sun Series” name.

The 20th anniversary edition of “Definitely Maybe ” is going to be available as a CD and digital download of the original and a three disc Special Edition which will include the rare recordings and demo’s, a 12″ vinyl LP that will feature all the bonus CD content as a free download and a deluxe box set which will feature the LP and the CD’s.

Included in the bonus content will be hugely popular  single “Whatever” (One of their best songs in this writers opinion) and also an unheard  acoustic version of “Shakermaker and “Live Forever” and a demo of “Half The World Away” which was recorded in Noel’s Tokyo hotel room.

The tracklisting for the three-disc Special Edition re-issue of ‘Definitely Maybe’ is as follows:

The tracklisting for the ‘Original 1993 Demos’.