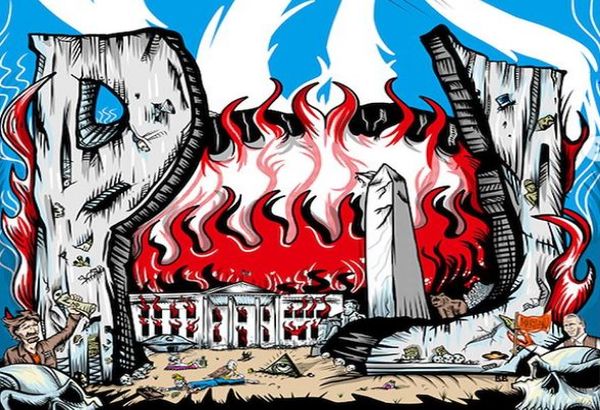 Pearl Jam have delivered a response after they received a backlash for a recent gig poster that showed the White House on fire, with Donald Trump’s corpse being picked at by a bald eagle on the garden lawn.

The image for the poster was conceived and designed by bassist Jeff Ament and artist Bobby Brown. That was in anticipation of the band’s show in Missoula, Montana on Monday night on August 13th. The controversial image of The Donald being picked over proved to be a real sore point with Republicans. That was because the show at the Washington-Grizzly Stadium was also a fundraiser for the re-election campaign of Democrat Senator Jon Tester.

Matt Rosendale a Republican politician who is seeking to unseat Tester as a senator described the poster as “disgusting and reprehensible”. Writing,  “It’s time for @JonTester to denounce this act of violence and blatant display of extremism”.

This poster from Pearl Jam is disgusting and reprehensible. It depicts a dead President Trump and a burning White House. It’s time for @JonTester to denounce this act of violence and blatant display of extremism! https://t.co/nIKTNPOFxX #MontanaFirst #MAGA #mtsen #mtpol

Now, the band have made a direct response to the war of words and defended their right to publicly criticise Trump under America’s First Amendment. Speaking to Rolling Stone, Jeff Ament said, “The role of artists is to make people think and feel, and the current administration has us thinking and feeling. I was the sole conceptualist of this poster, and I welcome all interpretations and discourse. Love, from the First Amendment, Jeff Ament.”

Meanwhile, on Sean Hannity’s Fox News program ‘Hannity’ this week, the conservative social commentator attacked Pearl Jam for their poster that has become perceived as a support of Democrat Senator Jon Tester.

Paul McCartney “Never Got Round To Telling John Lennon He Loved...