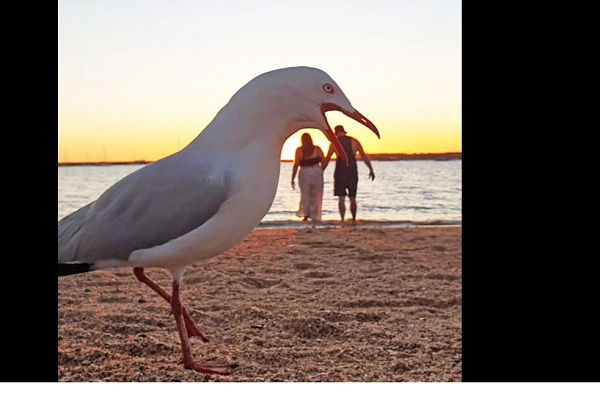 An intruiging use of photography appears to show a seagull ready to eat a couple on a romantic walk on the beach.

As the couple Makita Donovan and her partner Jace Spicer were filming this romantic walk along the beach, the seagull appeared to tower over them in the snap as they walked towards the sunset.

The Austrailian couple were hoping to capture this romantic moment. They were also unaware that the seagull had moved into the shot.

Jace also added, “It wasn’t until the next day when we decided to have a look at the footage and what wonderful photos we had taken that we realised what had happened”.

“We burst out laughing”. Also calling the seagull snap “the best photobomb that’s happened to us”.

“I turned to Makita and said, ‘What if that’s where I went to propose to you’”.

Back in May, Rentokil warned people ahead of the return of outdoor dining to have their wits about them following reports of “urbanised and aggressive seagulls”.

They also warned they these seagull may try to swipe food from your plate.

“We encourage members of the public to treat gulls with caution”, said Richard Faulkner a consultant of Rentokil. Faulkner also urged the public to “keep their distance from them where possible”.

Niall Hutch from Bird Watch also urged people not to feed the seagulls.

“Most gulls would normally have a healthy respect for humans and would stay away from us”, he said.

“But where they’re fed chips or bread they do learn that humans equal food and they can feel very entitled to it and be very aggressive”.

Eric Dempsey of Birds Ireland also said that it was important to avoid sensationalising the danger of Seagulls.

STARTS MONDAY: Win €10,000 In Diamonds With Lucy in Disguise