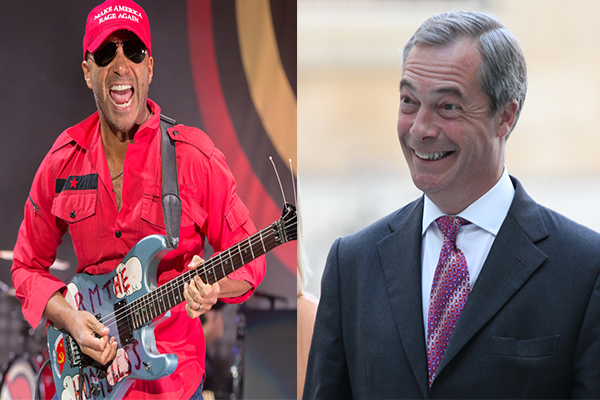 Rage Against The Machine’s Tom Morello’s disdain for Nigel Farage sees no sign of abating.

The axeman made it loud and clear that he has no time for the leader of the Brexit Party during his support to Muse over the weekend.

Bellamy and Co were playing in the UK at the London Stadium as part of their ‘Simulation Theory’ world tour. They were supported by Tom Morello and Pale Waves.

During his set on Saturday night June 1, the RATM guitarist shared a custom made message for MEP, Nigel Farage. A sign sellotaped to the back of his guitar simply read, “Fuck Farage!”

Morello has long been a detractor of the divisive Brexit advocate. According to the NME, in the past, The Prophets of Rage guitarist has called the politician a “pissweale” after he employed the ‘Farage Against the Machine’ title for his LBC radio podcast.

Morello has instructed Farage several times against using Rage’s ‘Killing In The Name of’ at Ukip Rallies. The axeman said of the Politician:

“I am open to accidentally giving Nigel a dry slap, if I encounter him on the tube. Though I doubt he rides the tube for fear of all the dry slaps he would receive. Regardless, that son of a bitch better stop using RATM as an underpinning for his racist diatribes, or we’re coming for him. Warning issued!”