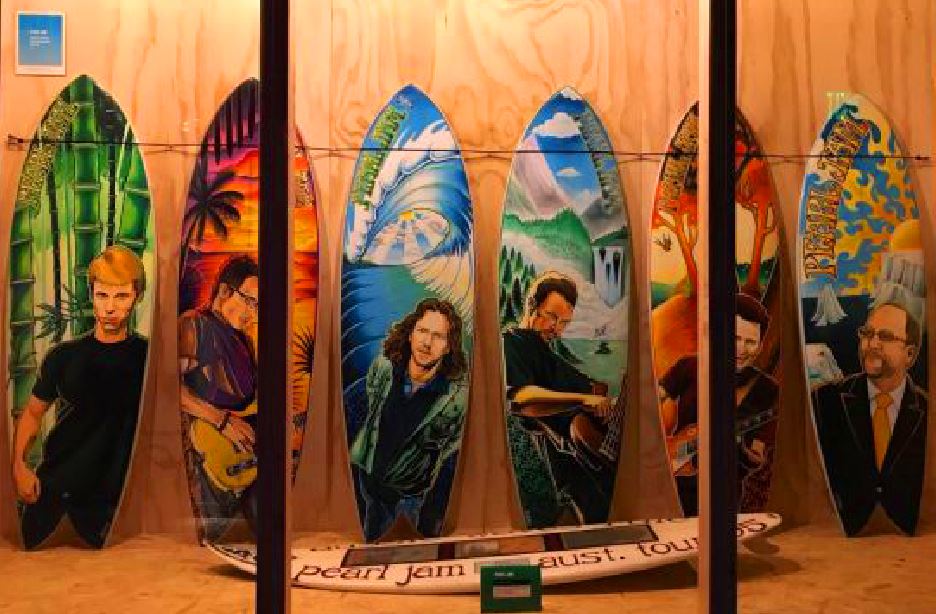 Pearl Jam’s ‘Home And Away’ Exhibition In Seattle Looks Superb! About five years ago Jeff Ament Bassist with Pearl Jam and his partner Pandora paid a visit to the grave of Ament’s old friend and bandmate Andrew Wood. Wood was the frontman of influential grunge legends Mother Love Bone. Wood tragically passed away owing to a drugs overdose in 1990. The untimely passing of the singer led Ament and Stone Gossard to form a new band that would go on to become Pearl Jam.

Ament was standing at the graveside of the larger than life singer and found it disappointing. Speaking to Rolling Stone, Ament said, “I was just like, ‘God, this should be so much more rad,’” Ament says, adding that someone had pried a decorative star off of it, leaving a gaping hole below Wood’s name. “So the whole way home we were riffing, ‘If anybody I know deserves a statue, it’s him.’ He would be the one that would love it.” Fans can now view that statue as part of Pearl Jam: Home and Away.

Ament reached out to sculptor Mark Walker, who commissioned the nearly eight-foot monument of Andrew Wood. Ament spoke to Walker about his memories of seeing Wood perform at the local club Metropolis, which is considered the birthplace of grunge. Ament explained that Walker, “was like, ‘We’re just down from Mount Olympus, people!’ So when we were sort of conceptualizing this, we thought, ‘Let’s make it like he’s coming out of the rainforest.’ Moss, starfish, tide pools. I think that’s all there.”

Walker immersed himself in pictures of Wood and made a journey into the forest to realise the tree-trunk base from which Wood’s figure emerges, his arms spread outwards. The final statue weighs 13,000 pounds and according to Ament, It costs “a lot!” But the bassplayer insists it was worth it, There’s a lot of things that would be different not just for me, but for the entire Seattle musical community, had it not been for him.”

Pearl Jam: Home and Away will run through until early 2019. The opening comes just after “the Home Shows,” the band’s first Seattle gigs in five years. Before the lights went down, the shows had raised $11.5 million to combat the city’s overwhelming homelessness crisis. You can read more about that here.

MoPOP curator Jacob McMurray and Pearl Jam archivist Kevin Shuss put together the exhibit, featuring more than 200 items.: Eddie Vedder’s marble notebooks and typewriter, sheets of handwritten lyrics, stage and video props, show fliers. There’s even a recreation of the band’s rehearsal space — and the actual towering letters from the front of the band’s first album Ten (a major photo-op for fans).

Last night at our supporters’ sneak peek of #PearlJamHomexAway Your support fuels MoPOP’s hopes to inspire, excited, and bring our community together. pic.twitter.com/0mI1mBr9VO

Kicking off this week with Andy standing watch over it all. As it should be. ❤️ I cannot wait for everyone to see the #PearlJamHomeXAway exhibit at @mopopseattle. Far beyond my wildest dreams. Truly incredible work, @kshuss11 and MoPOP! #thehomeshows #andywood