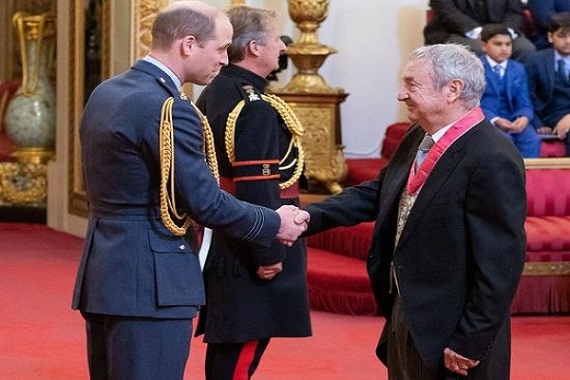 That was for his outstanding work in music that covers more than five decades. Mason joked that he “got the long service medal, but added, “it’s quite extraordinary, because you never have a sense of that time passing.”

Prince William awarded the medal to Mason and the drummer told The Independent: “What was quite nice was I’ve met him very briefly before and one thing we do share is flying helicopters.”

Mason, is a pricelss automobile collector and he admitted:

“Cars are my thing, originally when they told me I’d got this award they said it’s for music – I thought they were going to say it’s for services to the used car trade.”

Cos reports that Mason continues to drum his own outfit Saucerful Of Secrets.

Congratulations, Nick, who received his CBE yesterday. On being awarded the honour, Nick said that he was “honoured and delighted” but “just surprised that the Award is given for services to music rather than to the used car trade!” https://t.co/aDbpWO3hTd

Duff McKagan Talks About Life On The Road And Keeping Inter-Band...