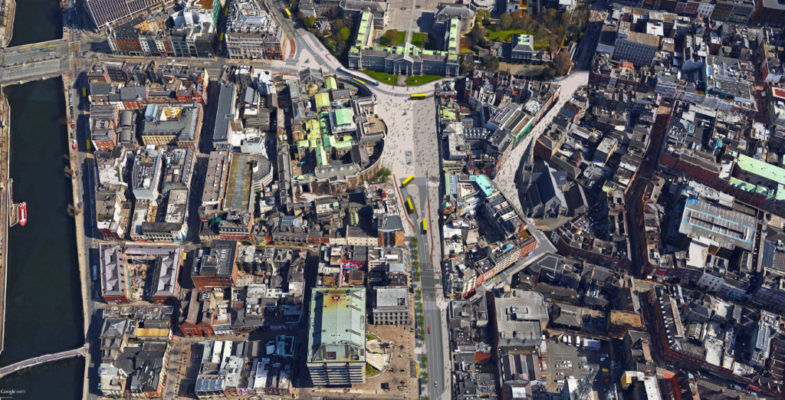 Those waiting with bated breath on news of Dublin’s College Green potential to be transformed into a civic plaza have been left frustrated yet again.

An Bord Pleanála is set to delay its decision, which was due at the end of August, until later in the year as a result of a backlog of planning cases. An Bord Pleanála says it will be October 5th before it’s ready to make a judgement on the proposed project.

The Construction Industry Federation is calling on the government to provide adequate resources after a number of high profile projects in the capital face delays due to a planning backlog.

The provision of 3,000 homes on the Poolbeg Penninsula has also been long-fingered. It’s been met with plenty of dismay and questions have been asked of how such key plans can be handled so inefficiently.

Director General of the Construction Industry Federation, Tom Parlon, says the problem appears to be down to the number of board members.

“It seems ridiculous, I see the excuse from the representative of the board saying that the number of board members dropped down to four last year, I think the normal complement is four,” he said.

“I can’t understand, from any sort of management; clearly if there are not enough board members to sit and review the appeals obviously they build up.”

Fianna Fáil Spokesperson on Transport, Tourism and Sport Robert Troy TD has warned commuters will face significant disruption in the months ahead as a result of the delay in making a decision over the proposed College Green Plaza.

“The handling of the College Green Plaza project has been chaotic since day one. The project was first announced by Dublin City Council in 2016 but over two years later we are still waiting to hear whether or not it will get the go ahead.

“Dublin Bus first raised concerns over the impact the plaza would have on its cross-city services, with the NTA stating that its support for the project was contingent on Dublin Bus being permitted to run two-way services on Parliament Street. Then the NTA reversed its decision.

The public hearings on the proposal were also postponed as a result of an administrative blunder. Now it transpires that a decision on the project will not be made until October at the earliest as a result of a planning backlog in An Bord Pleanála.

“It’s shocking that there is such a cloud of uncertainty hanging over this project considering its impact on public transport services. Dublin Bus have already stated that they cannot begin to redesign bus routes to alleviate traffic congestion until they know what the future of College Green is.

This means that the ongoing traffic congestion in the city centre is set to continue in the months ahead and this will have a detrimental impact on the entire bus network across Dublin.

Leo Attempts To Lurch Out Of Trouble As He Details Texts...