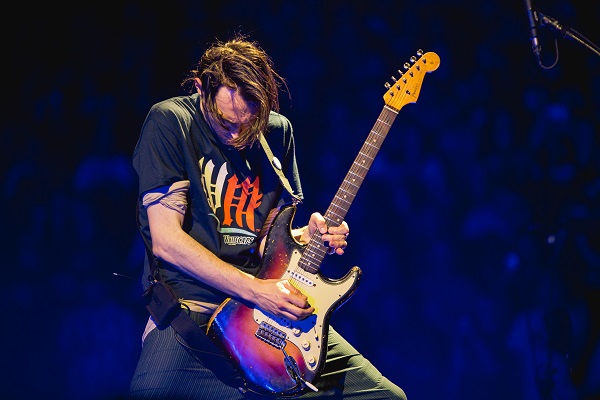 Under the pseudonym Pluralone, Klinghoffer has released his second album called I Don’t Feel Well and is due to be released on October 16th. We do not have to wait so long on single, The Night Won’t Scare Me, as it is available to stream right now. The song is five and a half minutes of a wash of guitars and piano-driven rock.

Klinghoffer was interviewed by RollingStone and spoke about The Night Won’t Scare Me. The track began with a chord progression that he wrote while still with the Chili Peppers and he then completed the album, with a burst of creativity, after his departure from the band.

He said it is a “perfect combination of words from this past year and speaks to many things that have been going on” and that it has a “hopeful, yet annoyed sense to it”.

I Don’t Feel Well is Pluralone’s second album release, after their debut album of last November, To Be One With You. Klinghoffer began working on it in March and says it could not have come at a better time, with the current pandemic surging through the United States. He wanted to try change the world’s mood with his music and spread some joy.

“Even though a lot of the world, right now, seems to feed and thrive off a constant diet of negativity, disgust and anger, I tried to remind myself that I really want to make something people might find beautiful.”

The Night Won’t Scare Me is an exciting, indie hit with psychedelic guitars and amazing vocals from Josh.

After leaving The Red Hot Chili Peppers, it looks like Klinghoffer has an exciting future ahead.

You can pre-order your copy of I Don’t Feel Well now on Pluralone’s website.

Steven Tyler Reveals His ‘Many Years’ Of Anger At Aerosmith Bandmates