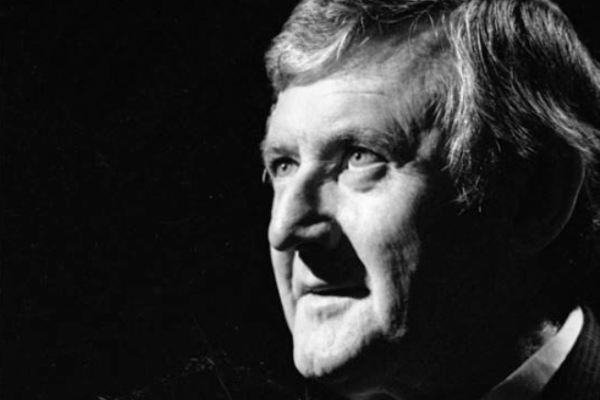 An actor, comedian, storyteller and impersonator of rare collective qualities, Niall Tóibín has died today after a long illness, one week shy of his 90th birthday.

A familiar face on stage and on screen for for several decades the Corkman’s film credits include Far and Away, Veronica Guerin and Ryan’s Daughter.

He found fame for television roles such as Father Frank MacAnally in Ballykissangel, Slipper in The Irish RM and Edward Daly in Bracken.

Born in Cork on November 21, 1929, Mr. Tóibín studied at the famed ‘North Mon’ CBS where he quickly took to the arts early on and joined a theatre company.

He moved to Dublin to work in the public service, before joining the Radio Eireann Repertory Company in 1953, where he played for 14 years. From there, he worked at the Abbey and in the 1970s found himself in television and film roles.

He was a frequent guest at the Late Late Show, a platform from which he showed his comic talent. On stage, he is best known for his performances as an adult, Brendan Behan, in many Borstal Boy productions, including a Tony award-winning Broadway play.

Mr. Tóibín’s other staging roles have been playing alongside Peter O’Toole in Waiting for Godot and playing King Claudius at Hamlet in the Abbey Theater. In 1987, he took on the role of Bull McCabe in John B Keane’s The Field.

Recipient of several awards, Mr. Tóibín received an honorary doctorate in arts from University College Cork in 2010 and a tribute to life on the screen of the Irish Film & Television Academy (IFTA) the following year.

In 2015, Cork City Council honored Mr Tóibín, who said he was “taken aback and delighted” to be granted the freedom to “Ireland’s largest city”.

“The freedom of his hometown is a high and very special honor. When this city is Cork, it’s hard to keep it humble, “he said. “For me, cork is not just home. Cork is for me, in many ways, heaven. It’s the best throwing team in the world, and I can think of many other virtues of which she is guilty. “

Mr. Tóibín told his audience at City Hall that he was “blessed to be born in Cork to a mother of Kerry”.

My mother was a Kerrywoman from start to finish, and yet, in a funny way, she always reminded me, even if I said something favorable about Kerry, ‘remember, and always remember that you You are a Corkman and you have the right to be proud of it and never forget it. “

“His attitude was not shared by everyone in Cork. ‘Oh what to change? It’s not Corkman at all. Of course, there are not two weeks left in Dublin and he has a Dublin accent. So, I had to be very very careful in my way of speaking because I was lucky to have something for mimicry and that I used it to hide the fact that I was doing was not really playing, I was just playing eejit,” he said.

Director Brian Reddin completed last week a documentary about RTÉ on the career of Mr. Tóibín. “I knew Niall long enough and I was a fan even longer,” Reddin told the Irish Examiner.

“We did it all year long and it will have a more poignant character now. It was broadcast on the occasion of Christmas and was an opportunity for friends, family and colleagues to pay tribute.

“We have a lot of archives. It was a good time and it would be nice if we paid tribute to Niall, not something that was done at the last minute, but a decent tribute of an hour,” he said.

Mr. Reddin stated that Mr. Tóibín was always helpful as a contributor to TG4 documentaries about his fellow actors. “He was faithful and gave a good time to our documentaries. There was no one with whom he had worked, from Richard Burton to Irish soap stars, he knew the area very well.

The filmmaker said he believed that Mr. Tóibín enjoyed the recognition of his acting career. “He enjoyed his stand-up, but I think it was important for him to be recognized as an actor,” Reddin said.

Farewell to our treasured friend Niall Tóibín, forever loved & remembered by his IFTA peers & colleagues. A brilliant & gifted actor, bringing fun & laughter into our lives. An IFTA Lifetime much deserved. Our sympathy & love to Síghle and the Tóibín family on their enormous loss pic.twitter.com/8VV7LkZfF9

Screen Ireland is saddened to hear that Irish actor and comedian Niall Tóibín has passed away. Our sincere sympathies to his family and loved ones. https://t.co/EcScJh7b5C