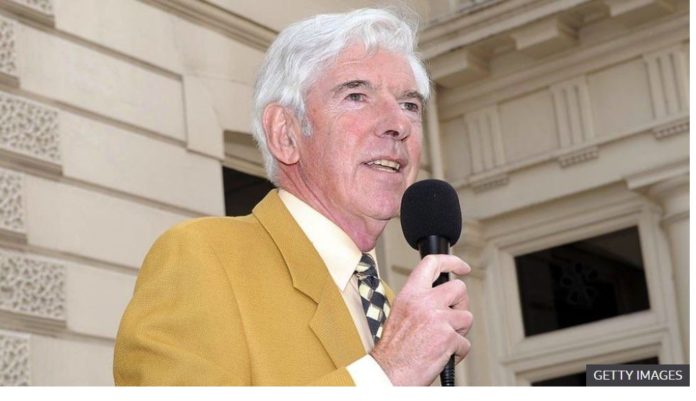 Tributes have been pouring for the late comedian and television presenter Tom O’Connor, who has died aged 81.

Born in Bootle, Merseyside O’Connor was known for hosting a series of gameshows in the UK. These included Name That Tune and Crosswits.

His family confirmed via his agent that O’Connor passed away on Sunday morning.

Starting out in the working men’s clubs, O’Connor’s TV career began when he appeared on shows like Opportunity Knocks and The Comedians.

He went on to become a household name throughout the 1970s and 80s, including shows like The Zodiac Game and Pick Pockets. From 1976 to 1983, O’Connor also hosted Name That Tune.

Later in his career, Tom also starred in Doctors during the early noughties.

He also appeared in a celebrity edition of Come Dine With Me in 2010. A year later, Tom O’Connor appeared on the Pointless Celebrity quiz show alongside former Olympic athlete and daughter in law, Denise Lewis.

Lewis herself paid tribute to her father in law.

O’Connor was also a regular guest on The Late Late Show over the years.

The tributes poured in for O’Connor. Former boxer Frank Bruno called him a “real comical character” and “great all round entertainer”.

“I worked with Tom many times over the years a real comical character”, Bruno tweeted, “he was so quick I was still laughing at a previous joke when had told another one, great all round entertainer”.

“Thanks for all the laughs, Tom”, he added.

Presenter and comedian, Les Dennis also paid tribute to the “wonderful” Tom O’Connor. He also called him a “great comedian and lovely man”.

“So very sad to hear that the wonderful Tom O’Connor has died”, he wrote. “Dustin Gee and I did summer season with him in Great Yarmouth in 1984. A great comedian and a lovely man,he will be sadly missed. Love and thoughts with Pat,Steve and all the family at this sad time. RIP Sir”.

So very sad to hear that the wonderful Tom O’Connor has died. Dustin Gee and I did summer season with him in Great Yarmouth in 1984. A great comedian and a lovely man,he will be sadly missed. Love and thoughts with Pat,Steve and all the family at this sad time. RIP Sir.

“How sad. I had the pleasure of meeting Tom O’Connor and he was kind, funny and a true gent”, BBC Breakfast host Dan Walker added.
“I loved watching him on telly – Crosswits was great. My sympathies are with his family and friends”.

New Documentary To Shed Light On The Beatles Trip To India...