Home Classic Albums Queen – A Day At The Races 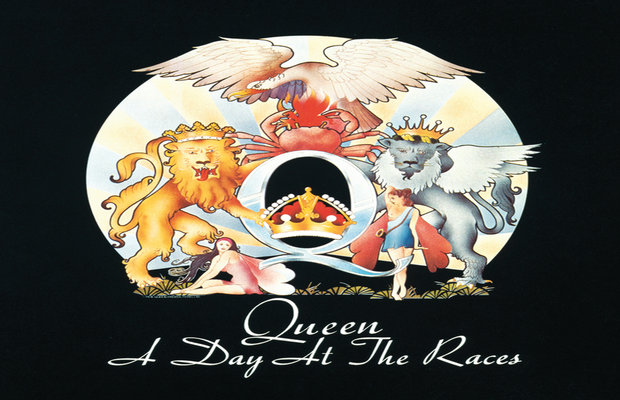 A Day at the Races is the fifth album by British rock group Queen, released in December 1976.

It was the band’s first completely self-produced album, and the first not to feature producer Roy Thomas Baker. Recorded at Sarm East, The Manor and Wessex Studios in England, A Day at the Races was engineered by Mike Stone. The title of the album followed suit with its predecessor A Night at the Opera, taking its name from the subsequent film by the Marx Brothers.

The album peaked at #1 in the UK, Japan and the Netherlands. It reached #5 on the US Billboard 200 and was Queen’s fifth album to ship gold in the US, and subsequently reached platinum status in the same country.

“Tie Your Mother Down” was written in Tenerife, when May was working on his PhD in Astronomy in early 19

The song is preceded by a one-minute instrumental intro using a Shepard tone harmonium figure, which is actually a reprise of the ending of “Teo Torriatte”: this was intended to create a “circle” in the album, typical, for example, of Pink Floyd’s albums. The ascending scale was created by recording a descending scale on a harmonium and playing it backwards for the record.

A music video was made for the song, directed by Bruce Gowers, based on a performance clip shot at Nassau Coliseum in Long Island, New York in February 1977 during the band’s US arena headlining tour. After its release in 1976, the song was played by Queen on every subsequent tour.

“You Take My Breath Away” was written by Mercury and based on the harmonic minor scale. All of the vocals and piano were done by him, and he performed it by himself at Hyde Park before recording it. There is a vocal interlude between this song and the next one that begins with a wash of vocals (repeating the words “take my breath”) created by echoes (of a multitracked Mercury) regenerating in reverse, which gradually evolves into the repeated phrase “you take my (breath away)” and reintegrates into the next track, “Long Away”.

“Long Away” was composed and sung by May. He used a Burns Double Six 12-string electric guitar for the rhythm parts instead of his Red Special. May had wanted to use a Rickenbacker because he admired John Lennon, but did not get along well with the thin neck of the instrument.

“The Millionaire Waltz” was written by Mercury about John Reid (Queen and Elton John’s manager at the time). It is another multi-key and multi-metre song like “Bohemian Rhapsody”, using abrupt arrangement changes and including May doing multi-tracked guitar choirs. It features a noteworthy example of John Deacon’s ‘lead bass’ playing.

“You and I” is John Deacon’s song on the album. It features him on acoustic guitar and Mercury playing Elton John-esque piano parts. The song was never played live.

“Somebody to Love” is the hit single of the album. Written by Mercury, the song was inspired by gospel music, especially that of Aretha Franklin, and Mercury, May and Taylor multi-tracked their voices to create a 100-voice gospel choir.

Like “Bohemian Rhapsody”, the major hit from Queen’s previous album, this song has a complex layering of vocal tracks, this time based on a gospel choir arrangement. The lyrics, especially combined with the gospel influence, create a song about faith, desperation and soul-searching; the singer questions both the lack of love experienced in his life and the role and existence of God.

An interesting thing is that right before the a capella section you can hear the background vocal say some and Freddie say one. Staying true to Queen’s guitar-driven style, it was also filled with intricate harmony parts and a solo by May. Mercury recorded a wide range of notes, going from a G#2 (in the last choral verse) to an Ab5 (at the peak of his melisma on “ooh” over the choir break). It went to #2 on the UK charts and #13 on the US singles chart.

“White Man” was written by May about the suffering of Native Americans at the hands of European immigrants. This song would be the focal point for a Freddie Mercury vocal solo on the A Day at the Races Tour and serve as both a Mercury vocal solo spot and a Brian May guitar solo spot on the 1977–78 News of the World tour. The song is one of Queen’s heaviest works, thematically and musically. On the later 2005 Return of the Champions Tour and the later 2008 Tour the riff to “White Man” was used as an introduction to Fat Bottomed Girls”.

“Good Old-Fashioned Lover Boy” was written by Mercury. It starts with a piano and vocal introduction by Mercury, then continues, with the bass and drums adding on, at the start of the chorus. The second verse is sung, followed by another chorus. At this point, the drums, bass and guitar drop out, which then leads into the bridge, sung by Mercury and Mike Stone. Following the Brian May guitar solo, another verse is sung, and then the chorus ends the track.

Multi-tracked vocals enhanced the song as well as May’s guitar choirs. The song was once performed live on Top of the Pops in June 1977, with Roger Taylor singing Stone’s part. Most of the track was a concert staple on the band’s A Day at the Races Tour and News of the World Tour.

“Drowse” was Roger Taylor’s song in 6/8 having him playing rhythm guitar and timpani and doing all of the vocals. May played slide guitar during this and “Tie Your Mother Down” (the second guitar solo in the middle of the song). Taylor’s song on the previous album, “I’m In Love With My Car”, was also in 6/8.

The song is notable for being Taylor’s first “soft” song, his previous compositions being usually the heaviest rock pieces of the album. Taylor sings octave lead vocals during the verses (except for the third and final verse).

“Teo Torriatte” was May’s tribute to the Japanese fans.

The song is notable for having two choruses sung in Japanese; it is one of only three Queen songs (the others being “Las Palabras de Amor” from Hot Space and “Mustapha”, from Jazz) in which an entire verse or chorus is sung in a language other than English. The song features a piano(played by Mercury) a plastic piano and a harmonium, which are played by May. The album’s closing harmonium melody is also its opening melody; the sequence was attached to the beginning of “Tie Your Mother Down”, the first track on the album. May described it as “a never-ending staircase”, otherwise commonly known, musically, as a Shepard tone.

In 2006, a national BBC poll saw A Day at the Races voted the 67th greatest album of all time. The same year, in a worldwide Guinness and NME poll to find the “Greatest 100 Albums of All Time”, A Day at the Races was voted #87. It was also featured in Classic Rock and Metal Hammer’s “The 200 Greatest Albums of the 70s,” being listed as one of the 20 greatest albums of 1976. Out ranked it No. 20 of 100 in a poll of “more than 100 actors, comedians, musicians, writers, critics, performance artists, label reps, and DJs, asking each to list the 10 albums that left the most indelible impressions on their lives.” In the 1987 edition of the The World Critics List, the BBC’s Peter Powell ranked A Day at the Races the 6th greatest album of all time, and Jim DeRogatis of the Chicago Sun-Times included the record in his “The Great albums” in 2006.