Home Classic Albums Pink Floyd: The Dark Side of the Moon 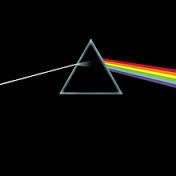 The Dark Side of the Moon is the eighth studio album by the English progressive rock band Pink Floyd, released in March 1973. It built on ideas explored in the band’s earlier recordings and live shows, but lacks the extended instrumental excursions that characterised their work following the departure in 1968 of founder member, principal composer and lyricist, Syd Barrett. The Dark Side of the Moon’s themes include conflict, greed, the passage of time, and mental illness, the latter partly inspired by Barrett’s deteriorating mental state.

The album was recorded in two sessions in 1972 and 1973 at Abbey Road Studios in London. The group used some of the most advanced recording techniques of the time, including multitrack recording and tape loops. Analogue synthesisers were given prominence in several tracks, and a series of recorded interviews with the band’s road crew and others provided the philosophical quotations used throughout. Engineer Alan Parsons was directly responsible for some of the most notable sonic aspects of the album as well as the recruitment of non-lexical performer Clare Torry. The album’s iconic sleeve features a prism that represents the band’s stage lighting, the record’s lyrical themes, and keyboardist Richard Wright’s request for a “simple and bold” design.

The Dark Side of the Moon was an immediate success, topping the Billboard Top LPs & Tapes chart for one week. It subsequently remained in the charts for 741 weeks from 1973 to 1988. With an estimated 50 million copies sold, it is Pink Floyd’s most commercially successful album and one of the best-selling albums worldwide. It has twice been remastered and re-released, and has been covered in its entirety by several other acts. It spawned two singles, “Money” and “Time”. In addition to its commercial success, The Dark Side of the Moon is one of Pink Floyd’s most popular albums among fans and critics, and is frequently ranked as one of the greatest albums of all time

The Dark Side of the Moon built upon experiments Pink Floyd had attempted in their previous live shows and recordings, but lacks the extended instrumental excursions which, according to critic David Fricke, had become characteristic of the band after founder member Syd Barrett left in 1968. Guitarist David Gilmour, Barrett’s replacement, later referred to those instrumentals as “that psychedelic noodling stuff”, and with Waters cited 1971’s Meddle as a turning-point towards what would be realised on the album. The Dark Side of the Moon’s lyrical themes include conflict, greed, the passage of time, death, and insanity, the latter inspired in part by Barrett’s deteriorating mental state; he had been the band’s principal composer and lyricist. The album is notable for its use of musique concrète and conceptual, philosophical lyrics, as found in much of the band’s other work.

Each side of the album is a continuous piece of music. The five tracks on each side reflect various stages of human life, beginning and ending with a heartbeat, exploring the nature of the human experience, and (according to Waters) “empathy”. “Speak to Me” and “Breathe” together stress the mundane and futile elements of life that accompany the ever-present threat of madness, and the importance of living one’s own life—”Don’t be afraid to care”. By shifting the scene to an airport, the synthesiser-driven instrumental “On the Run” evokes the stress and anxiety of modern travel, in particular Wright’s fear of flying. “Time” examines the manner in which its passage can control one’s life and offers a stark warning to those who remain focused on mundane aspects; it is followed by a retreat into solitude and withdrawal in “Breathe (Reprise)”. The first side of the album ends with Wright and vocalist Clare Torry’s soulful metaphor for death, “The Great Gig in the Sky”. Opening with the sound of cash registers and loose change, the first track on side two, “Money”, mocks greed and consumerism using tongue-in-cheek lyrics and cash-related sound effects (ironically, “Money” has been the most commercially successful track from the album, with several cover versions produced by other bands). “Us and Them” addresses the isolation of the depressed with the symbolism of conflict and the use of simple dichotomies to describe personal relationships. “Any Colour You Like” concerns the lack of choice one has in a human society. “Brain Damage” looks at a mental illness resulting from the elevation of fame and success above the needs of the self; in particular, the line “and if the band you’re in starts playing different tunes” reflects the mental breakdown of former band-mate Syd Barrett. The album ends with “Eclipse”, which espouses the concepts of alterity and unity, while forcing the listener to recognise the common traits shared by humanity.

All lyrics written by Roger Waters.