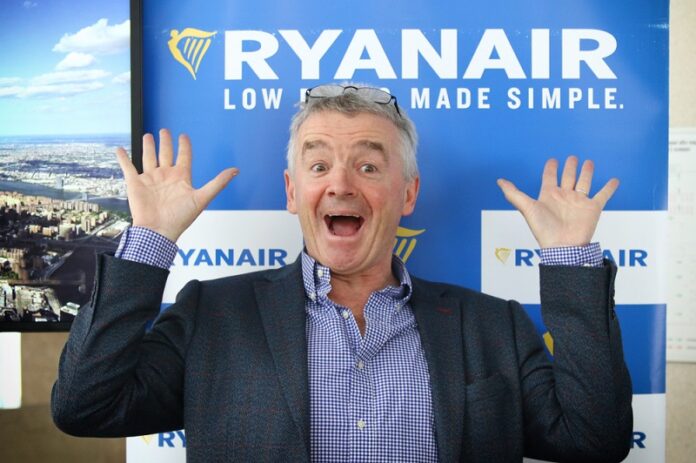 Ryanair CEO Michael O’Leary has accused NPHET of scaremongering and that they should release daily vaccination figures instead.

Speaking to RTÉ, O’Leary was quite critical of NPHET. “Part of this is the NPHET daily press conference trying to terrify the population.”

“Vaccination is the way out of this Covid crisis, not these failed lockdowns.”

He continued his criticism of NPHET and also took a dig at RTÉ when he said “We need some optimism in Ireland, not the daily doses of pessimism being delivered by NPHET and RTÉ.”

O’Leary then stated that Ryanair would not be asking for proof of vaccination from any passengers, despite vaccination certificates being proposed as part of Ireland’s rollout of the vaccine.

“We’ll be asking the Government and NPHET to get the finger out and accelerate the vaccine programme in this country and to vaccinate the high-risk groups which is the only way we’re going to come out of Covid-19. Not more failed lockdowns.”

It isn’t strange to see the Ryanair boss criticise NPHET and the Government so severely as O’Leary will want people on planes sooner rather than later. He and the company came in for criticism for their “jab and go” advert.

“No it was absolutely correct, it was factually correct saying that vaccines are coming, book now for Easter and summer – we fully accept that Easter will be a write-off.” (Per, The Irish Examiner)

Over the weekend it was announced that AstraZeneca will be providing 40 million vaccines in the first quarter of this year to the EU and it was released this morning that BioNTech will be providing an extra 75 million in the second quarter.

While a lot of work needs to be done, the vaccine news offers some hope for later on in the year.

For the latest updates on Ireland’s rollout of the vaccine and the current state of play of Covid-19, check out the Government’s hub here.