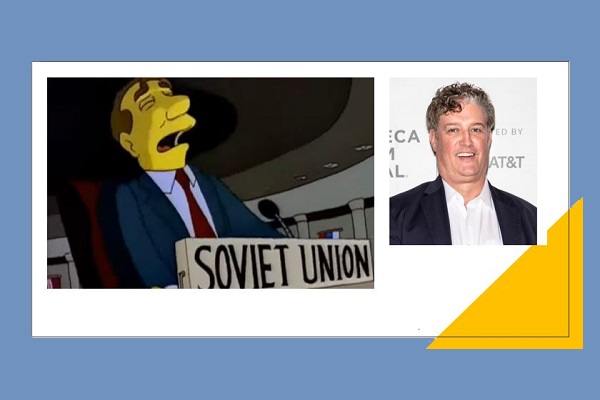 Al Jean has spoken out as an episode of The Simpson’s has somewhat predicted current affairs with the Russian Government. Following a post shared by one fan on Twitter, the writer, turned producer has confirmed that it indeed was a prediction of his. Speaking to Hollywood Reporter, Jean revealed it was actually “the norm” to suspect something of Russia, as “30 years of my life were lived with the spectre of the Soviet Union.”

Prior to yesterday’s Russian invasion of Ukraine, social media had been rife with users suggesting yet another correct prediction from Matt Groening’s creation. In an episode which aired back in ’98, the classic sitcom told the story of Homer joining the navy in Simpson Tide. While participating in a submarine exercise, Homer accidentally fires his captain out of the vessel into Russian waters. Causing chaos amongst governments, the scene cuts to Russia revealing themselves to be the Soviet Union. Cue troops and tanks descending upon the streets, while a pop-up Berlin Wall is instantly resurrected with armed guards. The episode also brings Lenin back to life, with the Soviet Union Premier breaking out of his glass coffin and shouting: “We must crush capitalism.”

Those social media posts did not go unnoticed by the Simpson’s showrunner, who said the 24-year-old gag — now a stark reality — is “very sad.” The long-running classic from 20th Century Fox has made social feeds on numerous occasions with their outlandish “predictions.” However, Jean feels, “in terms of predictions, there are two kinds we have: The trivial, like Don Mattingly getting in trouble for his hair in ‘Homer at the Bat’.

“And then there are predictions like this. I hate to say it, but I was born in 1961, so 30 years of my life were lived with the spectre of the Soviet Union. So, to me, this is sadly more the norm than it is a prediction. We just figured things were going to go bad.”

“Historical aggression never really goes away, and you have to be super vigilant,” the Simpson’s legend continued. “In 1998, when this clip aired, it was maybe the zenith of U.S.-Russia relations. But ever since [Russian President Vladimir] Putin got in, almost everybody has made it clear that he’s a bad guy and bad things are going to happen. There is the kind of prediction, where we reference something that has happened, happening again — we hope it wouldn’t, but sadly, it does.”

You can check this gag out in season 9, episode 19 of The Simpson’s.

Fantasising About Killing Your Boss Is ‘Normal’