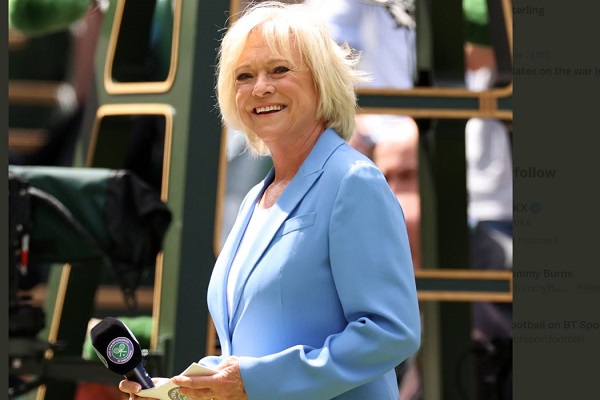 Visibly moved, a tearful Sue Barker managed to utter a few words, calling her time as presenter “an absolute privilege”.

Before her time as Wimbledon presenter, Sue Barker enjoyed a successful career as a professional tennis player, winning the French Open in 1976.

A full crowd had gathered at Wimbledon’s Centre Court, where they clapped, cheered and chanted Barker’s name.

Celebrating Barker’s career, John McEnroe introduced a film of her highlights, as a player and presenter. “Sue Barker is Wimbledon”, McEnroe said while introducing the video.

“I think my final message to Sue is that I’ll miss her massively, professionally”, former Tennis star Tim Henman also added. “She’s been here every Wimbledon that I’ve ever been involved in as a professional player and now working on the tournament side and for the BBC”.

“We’ll miss her massively but hopefully it’ll give her more time to get to the royal box in the evening and have a few more glasses of champagne. So I look forward to that”.

“I know you have to. I’m probably leaving too, don’t worry”.

“Anyway, thank you for everything. And I’m really looking forward to seeing what happens in the next chapter of your life and just go for it”.

“Hi Sue, I just wanted to send you a message to wish you a happy retirement”.

“You’ve been amazing for our sport and I’ve always, well I’ve grown up watching you on the TV, and then obviously I’ve been interviewed by you many times”.

“I’ve loved watching you on Question Of Sport as well. You’re going to be sadly missed by everyone who loves and watches tennis in this country”.

“We’re all sad about it but yeah, all the best in your retirement”.

Having won his 7th Wimbledon crown, the Serbian also paid this tribute to Sue Barker.

“Sue please don’t leave. I heard bad news today that after 30 years you decided to finish”, Djokovic said. “You are probably the most legendary broadcaster for tennis in Great Britain, so tennis is going to miss you, I’m going to miss you and miss the interviews”.

“Hopefully I get a chance to have at least one interview with you before you leave. So I get to say goodbye to you in person”.

“Thank you for everything you’ve done and contributed to our sport”.

Thieves Foil Their Own Burglary Of McDonalds In Dublin