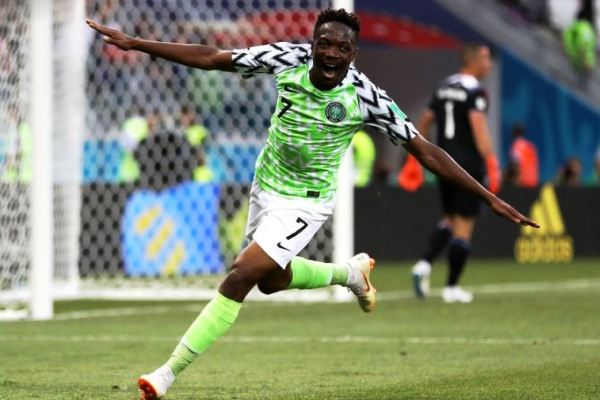 Nigeria have given themselves a lifeline and possibly Argentina too in the hope of qualifying from Group D but the Super Eagles, who deserved this win after a vastly improved second-half performance, hold the advantage and will be guaranteed to reach the last 16 if they defeat Jorge Sampaoli’s side in St Petersburg.

Ahmed Musa, brought in by manager Gernot Rohr scored two exhilarating goals while it went from bad to worse for Iceland when Gylfi Sigurdsson missed a late penalty. They can qualify but must beat Croatia – a tall after their famed levels of organisation deserted them in the Volgograd heat.

The Icelandc team lost the battle in the second half. Their energy levels were lower than those of the Nigerians and they lost too many individual battles everywhere.

The result gives a slight lift to beleaguered group rivals Argentina. Victory over Nigeria in their final game would see La Albiceleste safely into the last 16 – as long as Iceland do not beat group leaders Croatia. In that event, goal difference would decide who progressed.

Victory for Nigeria, on the other hand, would now guarantee their progress. Having started the day bottom of the group, they find themselves second – three points behind Croatia, who have already qualified for the knockout stage. Iceland, who face Croatia on Tuesday, and Argentina, who play Nigeria at the same time, both have one point.

Heimir Hallgrimsson reflected upon a tough day in Group D for his Icelandic charges:

“It’s a strange fact that we are still in the race. We didn’t think we would go through this World Cup without a loss and losses are always difficult to swallow. But we only need to beat Croatia, which is possibly easier to say than do [laughs].

“We’ve played Croatia four times in four years and we’ve often said we’re like a married couple trying to get divorced but we always meet up again. They’ve had two really, really good performances in the World Cup. The last one was a shining example of how good Croatia is but that also gives us confidence because we were ahead of them in our [qualifying] group and have already beaten them once in Iceland.”

Final round of fixtures:#NGA vs #ARG #ISL vs #CRO #WorldCup pic.twitter.com/vtf4k3h56S

Victory for Northern Ireland As South Korea Slip Up