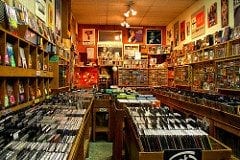 Nova News Team - March 22, 2017
0
The countdown is on for the 10th annual World Record Store Day which is taking place next month and again it promises another treasure trove of exclusive and limited releases. Over 500 releases have been announced to be made exclusively available through independent record shops on Saturday 22 April – on vinyl, picture disc, cassette and much more. David Bowie, Prince, The Cure and The Smiths are some of the artists with special releases set to drop for Record Store Day’s 10th anniversary.

On This Day In Music: Elbow’s Guy Garvey Was Born

Nova News Team - March 6, 2017
0
On this day in 1974 Elbow front man Guy Garvey was born in Bury Lancashire England. The birthday boy is one of seven siblings, and his younger brother is actor Marcus Garvey. In the early 90s, while at sixth-form college in Bury, Garvey formed Elbow with Mark and Craig Potter, Pete Turner, and Richard Jupp. However they only took on the name Elbow in 1997; having originally been known as Mr Soft.

On This Day In Music: The Rolling Stones Played Their...

Nova News Team - February 24, 2017
0
On this day, in 1963, The Rolling Stones played their first residency in The Crawdaddy Club. The Crawdaddy Club was a meeting of blues aficionados, it wasn’t just a pub in the Station Hotel, it was the discovery ground for new bands in London in the sixties.

Orbisons Win Rights To ‘The Beatle Who Vanished’ Film.

Nova News Team - February 15, 2017
0
Elbow’s seventh studio album Little Fictions is currently number one in the album charts. The follow up to 2014’s The Take Off And Landing Of Everything, is the second number one album for the British four piece.

Nova News Team - February 13, 2017
0
Arcade Fire are returning to Dublin this summer and have announced a huge outdoor show at Malahide Castle, Dublin on June...

Nova News Team - February 9, 2017
0
AC/DC frontman Brian Johnson has expressed his gratitude to the band’s fans in Sweden for their fund raising efforts in aid of the...