Advertisement
Home Music Watch The Doors’ Robby Krieger Guest With Alice In Chains For ‘The... 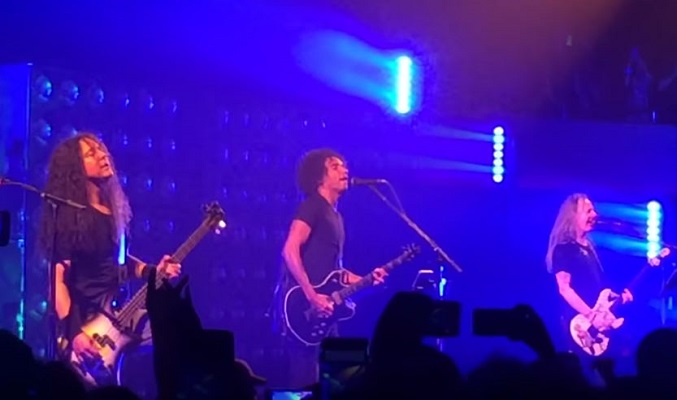 The Door’s guitar hero Robby Krieger made a special guest appearance alongside the band’s gig at the Hollywood Palladium last week. They’re presently touring across the states in support of latest record Rainier Fog, which was released last month on Aug. 24th. You can watch the “Rooster” performance below:

The rockin’ 19-track set list included classic tracks such as, “Man in the Box,” “Them Bones,” and “Down in a Hole” and also premiered new numbers “Never Fade,” “Red Giant,” “So Far Under” and “The One You Know.” Krieger made his appearance for the stand out track of the night, “Rooster,” and lead singer William DuVall led the rapturous crowd through the vocal introduction. As the band took their bows afterwards he expressed his gratitiude to the audience for their support, saying the night had been a lot of fun!

Meanwhile,  The Doors’ third record, 1968’s Waiting for the Sun is set to get a deluxe reissue for its 50th anniversary this year. Details and the full track listing is available below.

The ’50th Anniversary Deluxe Edition’ of the album, is due out on Sept 14th, and includes newly remastered audio, a disc of previously unreleased rough cuts of tracks from the sessions and five live songs from the Doors’ performance in Copenhagen way back in September 1968.

The band also released a 7″ single last month to commemorate ‘Hello, I Love You’ reaching No. 1 on Aug. 3 rd, 1968. That 45 featuring the single’s original B-side ‘Love Street’. Waiting for the Sun was released in July 1968 and became the Doors’ only No. 1 album. In addition to ‘Hello, I Love You,’ the record comprises of classics like ‘Spanish Caravan’, ‘The Unknown Soldier’, and ‘Five to One.’