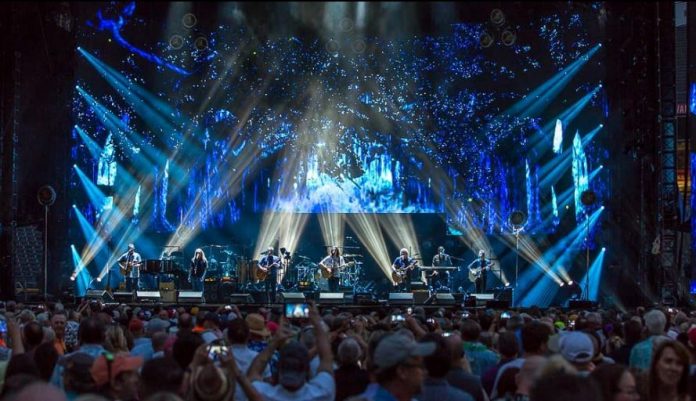 The Eagles started their Hotel California tour on Friday (Feb. 7) with the first of a three-show stint at the State Farm Arena in Atlanta.

The band began with their hit 1976 album in its entirety and performed it sequentially. UCR reports that the set including the “Wasted Time” instrumental reprise on the second side of the LP.

Backed by an orchestra and a choir throughout, Vince Gill took lead vocals on Randy Meisner’s “Try and Love Again.” Following an intermission, they returned with “Seven Bridges Road”.

The band then continued with a greatest hits set and the encore included “Rocky Mountain Way,” and a second rendition of “Hotel California” to finfish proceedings.

After Atlanta, The Eagles will play three nights at New York’s Madison Square Garden. The U.S. tour will run through April 26 concluding at the Talking Stick Resort Arena in Phoenix. The band also have dates booked in London.

The Eagles during their An Evening With the Eagles tour. Hey guys, how’s it goin’? I never post on here and somehow have 9,000+ followers… I’m unworthy. Anyway… QUESTION! What’s your favorite song Timothy B. Schmit sings lead on? “I Can’t Tell You Why,” “Love Will Keep Us Alive,” “I Don’t Want to Hear Anymore” or “Do Something?” MY ANSWER: “I Can’t Tell You Why.” Its a smooth shot of sorrow, nothing but glorious. #Eagles #TheEagles #DonHenley #TimothyBSchmit #DeaconFrey #GlennFrey #BernieLeadon #VinceGill #RandyMeisner #DonFelder #JoeWalsh #iCantTellYouWhy #LoveWillKeepUsAlive #AnEveningWithTheEagles

“I Was Sexually Abused As A Child” – Marcus Mumford