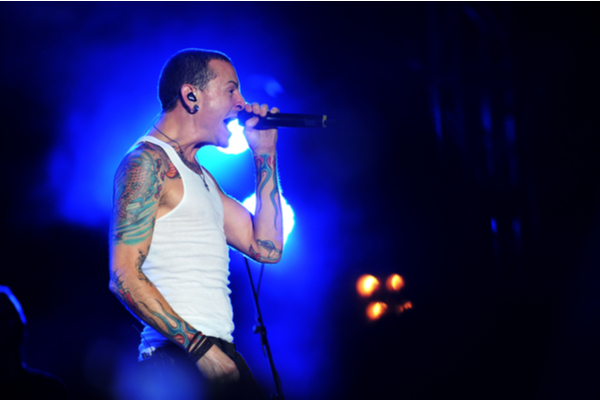 The tributes have been pouring for the late Linkin Park frontman Chester Bennington on the fourth anniversary of the singer’s death.

Chester Bennington died aged 41 on 20 July 2017 on what would have been the the 53rd birthday of his friend and fellow musician Chris Cornell.

“You always made everything better”

Along with fans, Chester’s widow Talinda Bennington shared an emotional tribute to her late husband on Twitter. She also included a photo of Chester in a “lettuce cup” on his head alongside this message.

She continued, “I’m so glad that the kids and I have vast amounts of pictures and videos to remember you by. We miss you every second of every day. You were the best person I have ever known. I see you in our babies every day. Lily is your mini me, with her looks and beautiful voice. Tyler has your wit, intellect, looks, and the same obsession for trying to figure out space and time. And Lila, she has your heart of gold”.

“When they were newborns, you wrote your hopes and dreams for them. God must have seen what you wrote because they are truly everything you wished for them to be”.

“I know you can see them. I would give anything to have you back so they could see you. But that’s why we have our entire life together on home videos. I’m glad I never stopped recording. Today we will watch some of them and remember how fucking amazing you were”.

“It’s been 4 years and this still feels surreal”, one fan wrote.

“4 years since you passed and it still hurts so much, every single day”, another wrote. “I miss this dude”.

Check out Nova’s report on that here.