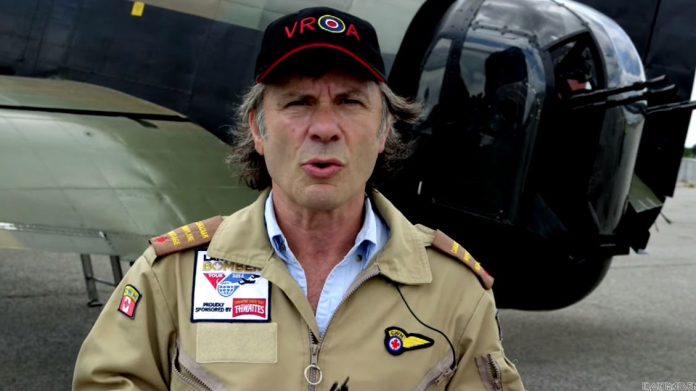 Back in July 2017 and ahead of Iron Maiden’s show in Toronto, Canada, frontman Bruce Dickinson flew over Hamilton. That was in the Canadian Warplane Heritage Museum’s Lancaster Bomber.

The rocker is a licensed commercial pilot and the museum invited Dickinson to avail of the rare opportunity.

Located beside Hamilton airport, the staff at the museum were aware that Dickinson is a huge aviation and history fanatic and would be more than happy to fly the vintage aircraft.

In the run-up to the band’s Toronto shows over the weekend, The Maiden shared a new clip of Dickinson’s Lancaster flight. A caption with the footage stated: “Here’s what Bruce got up to last time we were in Toronto…”

Speaking to Wales Online, Dickinson revealed that he still gets a buzz out of flying, but that it’s a completely different experience than to playing live.

“The satisfaction flying aeroplanes is getting the job done, but the satisfaction with playing live is external, looking out at all the people looking at you,” he said. “With an airliner, it’s all internal. If you’ve got passengers, nobody goes, ‘Wow! Wasn’t that great?’ They’re thinking about the rest of their day. Your job as an airline pilot is to deliver them safely and be invisible. That’s quite nice for me because it’s completely the opposite to what I do when I sing.”

According to Blabbermouth, Dickinson flew his band around the globe in their plane called Ed Force One. That’s the namesake of IRON MAIDEN’s legendary mascot Eddie.

Dickinson bagged a commercial pilot’s license after learning to fly back in the 1990s. Then in 2012, the rocker set up Cardiff Aviation which is an aircraft maintenance company.

Watch: Placebo Release Previously Unseen Video for ‘Every You Every Me’