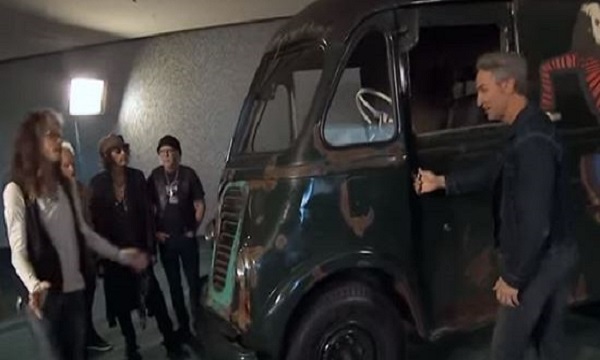 American Pickers have presented Aerosmith with the long-lost tour van! The legendary rock band purchased the van for use at their current Las Vegas residency

Last year, the first ever tour van owned by Aerosmith was featured on an episode of American Pickers after the beat up old rockmoblie was discovered by the show’s hosts Frank Fritz and Mike Wolfe.

It’s a 1964 International Harvester Metro and still had the band’s name painted on the side. The small van had spent years rusting away in a woodland near Chesterfield, Massachusetts.

Aerosmith appeared on a recent episode of the History channel TV show where the group were reunited with their original 1970s touring van. CoS reports that the rockers will use the restored van for use in their Las Vegas residency.

“You guys did such a great job making it look like it did then, because this is the kind of wear that was on it”, after which singer Steven Tyler jumped in the driver’s seat and honked the horn.

Wolfe explained how they attempted to keep as much of the 1964 van intact. However, they were forced to use a substitute van to complete the project because much of the original was beyond repair.

The van is set to end up at the Rock & Roll Hall of Fame museum in Cleveland. Check it out below!

Thin Lizzy’s ‘The Boys Are Back In Town’ Wasn’t Meant To...