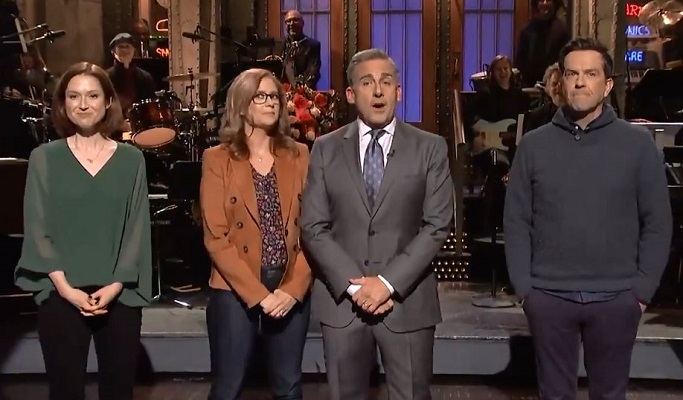 Comic actor Steve Carell has always made his intentions clear concerning any revival of his character Michael Scott in the popular American version of ‘The Office’. It seems the Anchorman co-star actor loves lamp more than any notion of the sitcom’s reboot.

During Carell’s monologue as host of Saturday Night Live, he was once again called upon to consider a reboot. However, this time it wasn’t adoring fans or nosey journalists, the pleas came from his former cast mates. Jenna Fischer, Ed Helms, and Ellie Kemper. If that wasn’t enough, it wasn’t just the cast that all made their case to Carell but his own wife and kids took the opportunity to plead with the actor. Check out the quasi Office reunion below.

While NBC is said to be considering rebooting The Office, but it’s not likely Carell will take part. Carell said in a recent interview,

“Apart from the fact that I just don’t think that’s a good idea, it might be impossible to do that show today and have people accept it the way it was accepted 10 years ago. The climate’s different,” “I mean, the whole idea of that character, Michael Scott, so much of it was predicated on inappropriate behaviour.” He, of course, has a point.

Metallica Gift Street Performer New Drums After His Were Stolen

WATCH: A Sir and A Dame Talk “Belfast”