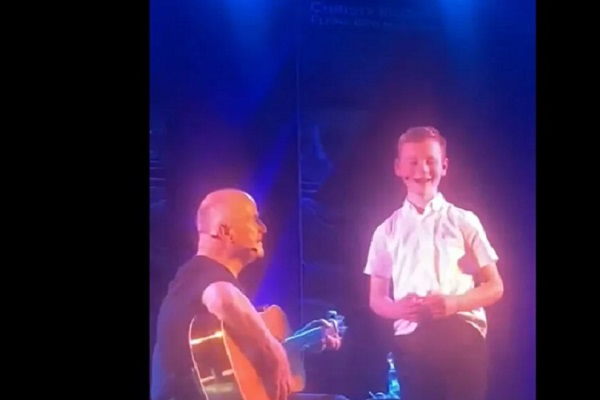 During a recent gig at the Armagh City Hotel this week (October 13), Christy Moore once again endeared himself to our hearts, after inviting a “young lad” onto the stage with him.

After bringing the young boy whose name is Míceal onto the stage, the pair performed a live cover of the track Nancy Spain in front of a packed audience.

The Kildare native later shared footage of this live performance via social media.

“I was delighted to sing a tune with young Mícéal in Armagh last night – our tradition is in safe hands. Christy”, the singer wrote. Check out the footage below.

I was delighted to sing a tune with young Mícéal in Armagh last night – our tradition is in safe hands. Christy https://t.co/omQDPYfd7C

“Christy at his very best”

One fan named Paddy Fox wrote, “Make this video go viral. Christy Moore invited this young lad up to sing on the stage in Armagh tonight”.

“This is Christy at his very best”.

Another Moore fan added, “This is just beautiful”. While another also commented, “Phenomenal, the young lads smile”.

“I have chills watching that. After the day I had this is exactly what I needed. Christy is the best!!!!”, was another remark.

Last November, Christy Moore was recognised for his efforts after he was handed the Lifetime Achievement award at Dublin’s Vicar Street in an event hosted by John Creedon and Ruth Smith.

“My life has been immersed in the pursuit of folk songs and ballads”, Christy Moore said. “Being part of our folk song community has been an important part of my life”.

“To receive this award from my peers is a great honour, one that I will remember and cherish. We need songs, songs need singers, singers need listeners”.

“We all need each other”.

Christy Moore was presented with his award by Damien Dempsey. There is also more on this report from Nova here.