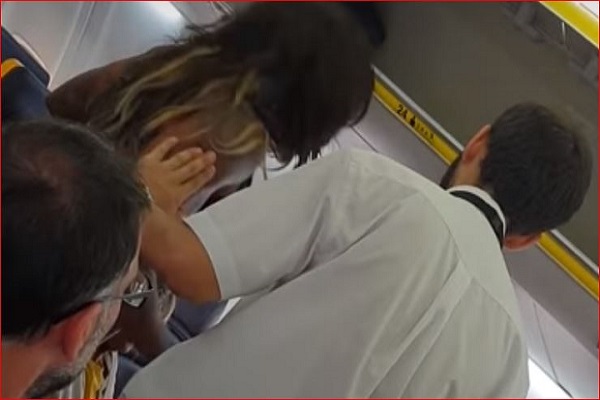 A man who videoed a racist altercation on a Ryanair flight admitted he opted not to intervene so he could make what happened public. David Lawrence filmed a man delivering a vocal onslaught of racist abuse towards a woman.

Mr Lawrence argued that in the age of social media “visual is important” and “now the world knows” what happened. Speaking to BBC Breakfast via Breaking News, Lawrence explained, “I had to make a difficult decision at that time because if I had stepped in I don’t think you would have seen the footage that I captured.”

The film was shot on flight FR015 from Barcelona to London Stansted on October 19th. The tirade occurred before the plane had taken off. In the clip we see a man shouting at a woman instructing her to move seats while her daughter tries to defend her mother. She tells him her mum is disabled.

The man shouted, “I don’t care whether she’s f****** disabled or not – if I tell her to get out she gets out.” The man can be heard calling the elderly woman an “ugly black bastard”, and saying “don’t talk to me in a foreign language you stupid ugly cow”.

No other passengers got involved, Mr Lawrence explained, “In fact, one of the passengers whilst I was filming basically said to me don’t you think you’re being a bit childish by filming this.”

A former cabin crew supervisor, Ally Murphy said Mr Lawrence made the right call in deciding to film the incident.

“It is great that David did film that. This happens every day in the community and people need to step forward and say this isn’t right. But as a cabin crew member it is not great when people pile in and try to take things into their own hands,”

Ryanair tweeted on Sunday that they had reported the incident to Essex Police. Stating, “As this is now a police matter, we cannot comment further.”