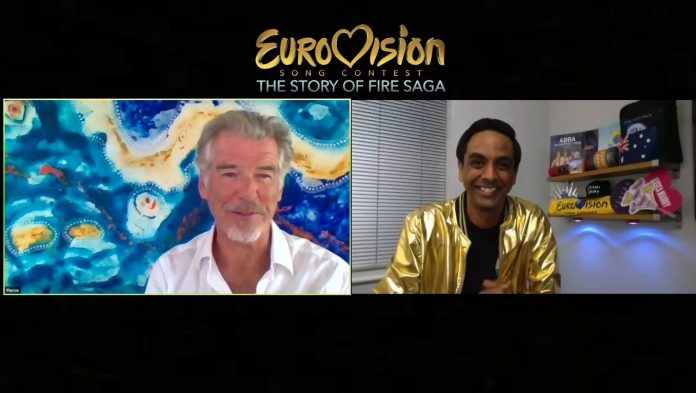 He’s the only Irish actor to don a tux and say those famous words; “I’m Bond, James Bond”. He made us laugh when he got the Heimlich manoeuvre from “Mrs Doubtfire” and he even tried to sing in “Mamma Mia”!

Now Pierce Brosnan is playing the grumpy father to Lars, Erick Erickssong, in the new Netlix comedy about Eurovision.

In the Netflix comedy EUROVISION SONG CONTEST: THE STORY OF FIRE SAGA, Will Ferrell & Rachel McAdams star as Icelandic musicians Lars and Sigrit who stumble into the world’s biggest song competition.

Dan Stevens, Graham Norton & Demi Lovato also star in EUROVISION SONG CONTEST which was shot on location in the UK and Iceland between August and October 2019.

Producer, co-screenwriter and star Will Ferrell has long loved the Eurovision experience. He spends every summer in his wife’s home country, Sweden, and her cousin got him hooked on the singing contest years ago. “We watched this crazy spectacle for three hours,” he says.

“There’s a level of camp that is unlike anything we have here in the U.S. In Europe, everyone has a Eurovision watch party. Some people are legitimately watching while others are making fun of it. But everyone tunes in and has to know who won. I immediately thought this would make a great backdrop for a movie: it’s a great playground for comedy. I assumed I would get beaten to the punch by someone in Europe — but no!”

EUROVISION SONG CONTEST: THE STORY OF FIRE SAGA is streaming now on Netflix.

Star-Studded Lineup To Cover Oasis Song for Children In Need