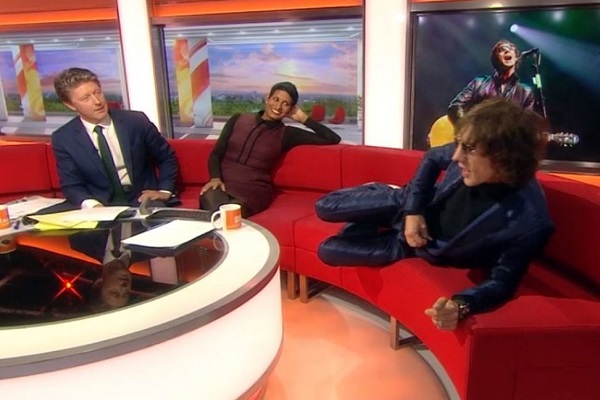 Richard Ashcroft caused quite the kerfuffle on BBC Breakfast Thursday, October 24th. The rockstar jumped over the sofa whilst making a bizarre reference to The Truman Show before going off on one.

Ashcroft is busy promoting the release of his latest record ‘Natural Rebel’ and he subjected co-presenters Charlie Stayt and Naga Munchetty to a bit of a rant. As he leapt like a gazelle over the sofa, the rocker remarked, “Life feels like The Truman Show. But I just want to say ‘hello to Manchester’.”

The former Verve frontman then banged his head on the glass, saying, “Woah, it is The Truman Show,” As he returned to his seat the singer claimed he wants to “break the order of things” with the release of ‘Natural Rebel.’

He told Stayt and Munchetty to not question why he was wearing sunglasses, “Rock n roll is like a religion, so don’t ever question one of the key attributes to rock and roll.” That was before he lay flat out on the sofa. Rebel!

Natural Rebel is out now.