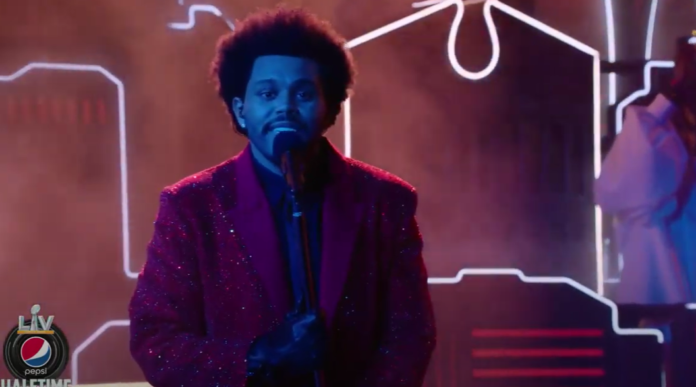 The Weeknd became the first Canadian to perform solo at the Super Bowl yesterday. The singer joined the likes of Lady Gaga, Michael Jackson and Diana Ross who have performed at the American Football event in the past.

During this 15 minute performance, The Weeknd sang a range of hits from throughout his career. This performance included 2015 hit “Can’t Feel My Face”, along with “Blinding Lights” and “Save Your Tears” from his latest album “After Hours”. Other tracks performed by the singer included “Starboy” and “The Hills”.

He began this set by appearing from between two halves of the stage which was built into two stands of the stadium.

He was not joined by and special guests, however the Weeknd was accompanied by a choir, dancers and a backing group. The dancers were dressed in matching red jackets and face bandages, akin to the Weekn’d “After Hours” character.

Ahead of the show, the singer had said, “I’ve been reading a lot of rumors. There wasn’t any room to fit it in the narrative and the story I was telling in the performance. So there’s no special guests, no”.

The artist reportedly put $7 million of his own money into the production of this show. It was performed completely live, despite speculation that some or all parts of the performance may be pre-recorded due the pandemic.

However, this performance from the Weeknd was met with ambivalence online.

One person tweeted, “I love Abel but Im a little underwhelmed with this half-time show so far… #SuperBowl”

Another member of the public took it a step further, “Like this if The Weeknd was the WORST performance in Super Bowl history!”

Another wrote, “Most boring half time show ever. I miss JLo and Shakira. #SuperBowl“

However, there were some positive reviews of the Weeknd’s performance.

Another added, “Loved that so much. I know everything isn’t back to normal BUT that half time show made things feel semi normal again. #SuperBowl“

Another positive reviewer called it one of the most “visually stunning shows” they ever witnessed. Another called it “the best part of the Super Bowl so far”.

You can watch the Weeknd’s performance at the Superbowl here.

This all comes after the singer recently annouced plans to perform live in 2022.