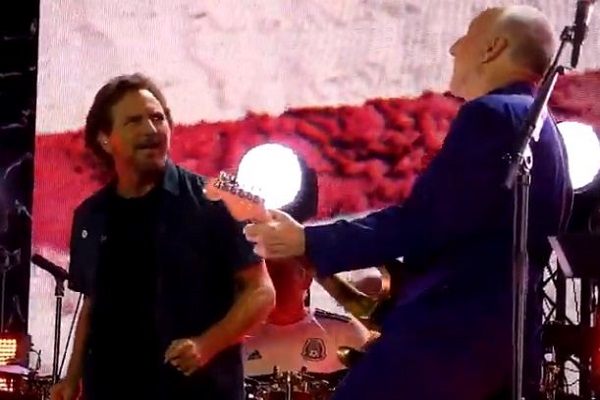 The Who performed a legendary show with a full orchestra at Wembley Stadium in London on Saturday night, July 6th.

The NME reports the band last rocked the landmark venue for Live Aid in 1985.

The show sparked controversy when first announced with many fans complaining about the high ticket prices.

Remarking on the high prices, guitarist Pete Townshend said to the crowd: “Thank you so much for working so hard to pay for the tickets. It means a lot to us.”

Despite a price drop in recent weeks there were still a lot of empty seats in the stadium.

“Some of you may already know that Alan Rogan passed away two days ago. He was my guitar tech for over 40 years. He battled cancer and he finally lost his battle. He was a great guy and he was chipper and in high spirits until the end.”

Later, Pearl Jam frontman Eddie Vedder, who supported the band earlier in the evening, joined The Who onstage during a section dedicated to their 1973 album ‘Quadrophenia’, for ‘The Punk And The Godfather’

The rockers also played two new songs during their two and a half hour set. The new tunes coming from their imminent long player – ‘Still Waiting For The Big Cigar’ and ‘Hero Ground Zero’.

Ozzy Osbourne’s Next Album Is Already In The Pipeline!