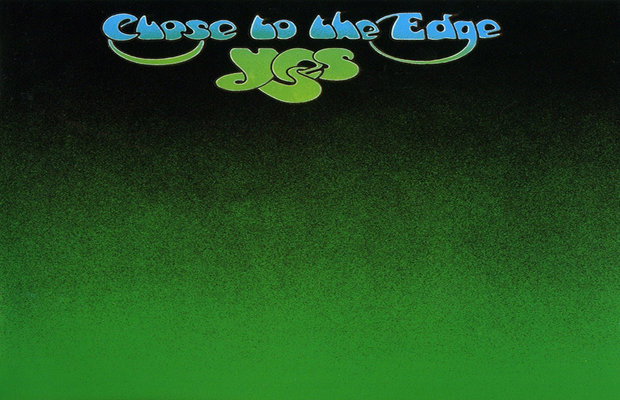 Close to the Edge is the fifth studio album from the English progressive rock band Yes, released in September 1972 on Atlantic Records. Produced after the commercial and critical success of Fragile (1971), it is the last featuring drummer Bill Bruford before his brief return in 1990.

Released three months into its supporting tour, the album was a commercial and critical success. It peaked at number number 3 in the United States and number 4 in the United Kingdom.

In April 1972, after completing the Fragile Tour in promotion of their 1971 album Fragile, the band started to prepare and rehearse material for their next album. The line-up during this time was singer Jon Anderson, bassist Chris Squire, drummer Bill Bruford, guitarist Steve Howe, and keyboardist Rick Wakeman.

Anderson wrote the title track was inspired from reading Siddhartha by German novelist Hermann Hesse. The song tracks the awakening of Hesse’s character “close to the edge” of a river (and, symbolically, of the serial lifetimes of his soul), where he experiences a spiritual awakening. Bruford says in his autobiography that he came up with the title to describe the state of the band itself, as he had with its predecessor Fragile. He left the line-up after completion of the recording to play with King Crimson, which led to Yes finding ex-Plastic Ono Band member Alan White to replace him before starting a new US tour.

The spiritual influences introduced by Jon Anderson, are already evident in the music and lyrics of all three tracks on Close to the Edge. Renewal and repetition are other main themes; the title track starts and finishes with the same sound effects of running water and birds, and in “Siberian Khatru” there is the repetition of two-syllable words and phrases.

Recording for Close to the Edge took place at Advision Studios in London between April and June 1972. Engineer Eddy Offord assumed his role; he had worked with the band since 1970. It marked the first time they wrote a song lasting an entire side of a vinyl record. Segments of ideas were recorded, mixed, edited, re-edited, re-recorded, debated and argued over at length in between travelling to give live performances; all the instruments and microphones would have to be set up again when the band got back in the studio. This was all back in the days when no computers, logic recall or mixdown automation existed in the studio world. Sound engineer Eddie Offord worked hard to make sure the result had a coherent sonic identity under the disruptive circumstances. In this piecemeal fashion, as time went by, the band built up the “Close To the Edge” track to make it more elaborate and grand.

One of the major challenges in writing the title track was deciding how to end such a magnum opus. Rick Wakeman, who had a music college education and lots of studio experience, played a major role in developing musical variations to existing ideas and applying concepts like recapitulation to a find more logical and musically satisfying conclusion for the extended work, as well as constructing and developing the two other tracks, “And You and I” and “Siberian Khatru”. Reflecting upon these complex engineering, logistical and musical challenges some twenty years later, drummer Bill Bruford stated: “On Close To the Edge, we got lucky”.

A promotional-only version of the LP was distributed to US radio stations that featured the title track split into shorter segments. This was done to increase radio exposure as most radio stations did not want to air an 18-minute song. Most of the segments were in the range of 3 to 5 minutes and all were marked on the record to assist disc jockeys.

The album is still widely regarded as a major achievement in progressive rock circles, as well as a benchmark by which most progressive rock music is measured, including the individual and collective works by the members of Yes themselves. It is routinely cited in music polls and by progressive rock musicians as one of the greatest progressive rock albums of all time. In the Q & Mojo Classic Special Edition Pink Floyd & The Story of Prog Rock, the album came in at number 3 in its list of “40 Cosmic Rock Albums”. It is also listed in the book 1001 Albums You Must Hear Before You Die. Progarchives.com voted it the greatest progressive album of all time in 2006. Guitar World ranked it number 67 in their (Reader’s Choice) list of the 100 Greatest Guitar Albums of All Time.

In 1994, the album was remastered by Joe Gastwirt. The album was remastered once more by Rhino Records which was released in August 2003. It contains four bonus tracks, two are the single edits “Total Mass Retain” and the band’s rendition of “America” written by Paul Simon plus a studio run-through of “And You and I” and “Siberian Khatru”.

In 2013, Audio Fidelity released a hybrid SACD/CD mastered at Stephen Marsh mastering by Steve Hoffman; AFZ 147. It had only the 3 LP tracks. A 2013 remastered edition is also available in various downloadable high-resolution formats at either 24bit/96khz or 24bit/192khz from HD-Tracks, as are many other Yes titles.

On 11 November 2013 a new stereo and 5.1 mix by Steven Wilson was released in both a CD and DVD-Audio or CD and Blu-ray package