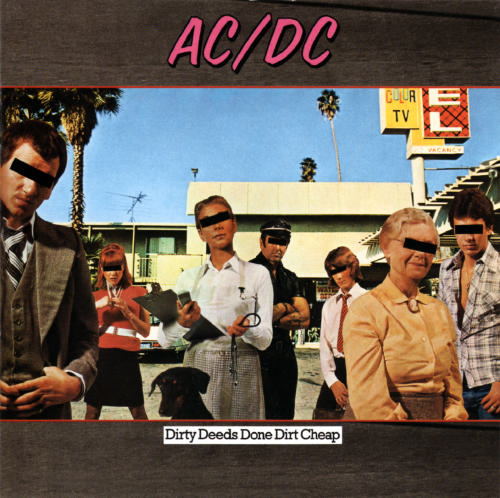 It was originally released in Australia on Albert Productions on 20 September 1976. A modified international edition was later released on Atlantic Records on 17 December 1976.

The album has been certified 6x platinum in the US, selling at least six million copies, becoming the third-highest selling album by AC/DC in the US after Highway to Hell (7x platinum) and Back in Black (22+).

Following up on the preceding Australian album, 1975’s T.N.T., AC/DC delivered another recording with a number of fan-favourite songs, including the title track, “Squealer”, “Problem Child” and others. Dirty Deeds Done Dirt Cheap also contains some controversial lyrics. For example “Big Balls” lyrics uses double entendres, referring the title phrase to costume parties and to testicles.

Dirty Deeds Done Dirt Cheap also led to more AC/DC appearances on Australia’s Countdown music programme, following those in support of High Voltage and T.N.T. These appearances included a live performance of the album’s title track, as well as a music video for “Jailbreak”.

A song titled “I’m a Rebel” was recorded during this album’s sessions in 1976, with music and lyrics written by Angus and Malcolm Young’s older brother, Alex Young[2] .[3] This song was never released by AC/DC and remains in Albert Productions’ vaults. German band Accept later released it as a single and named their second album after the song.

AC/DC’s record label at the time, Albert Productions, was not happy with the album’s vocals and production. According to bassist Mark Evans, the band’s manager Michael Browning told him he assumed Bon Scott would be fired as a result.

The international edition of Dirty Deeds Done Dirt Cheap, released in November 1976, is considerably different from the original Australian edition, and features a different cover and track order. It was not released in the US until April 1981.

On this album, the singles “R.I.P. (Rock in Peace)” and “Jailbreak” (featured on the Australian version) were replaced by “Rocker” (from T.N.T.) and “Love at First Feel”, the latter being one of only two tracks from international AC/DC albums not available on the band’s Australian albums. (The other is “Cold Hearted Man”, released on European pressings of Powerage.) Conversely, several songs available on Australian AC/DC albums did not see overseas release until more than thirty years later. However, “Love at First Feel” was released in Australia as a single in January 1977.

Though the international album was released by Atlantic Records in Europe in 1976, it was not picked up for a US release at the time. Following the American success of Highway to Hell in late 1979, copies of the album began to appear as imports in the US. Some of these imports were the original Australian edition on Albert Productions. However, Atlantic also pressed the international version in Australia, and many of these copies were also exported to the US. Strong demand for both import versions in the wake of the even greater success of Back in Black eventually led the US division of Atlantic to finally authorize an official US release in April 1981, which went straight to #3 on the Billboard album charts.

Two songs on the international album were edited from the full length versions on the original Australian album. The full length “Dirty Deeds…” has the title of the song chanted four times starting at 3:09, but on the edited version the chant is heard only twice. “Ain’t No Fun…” lasted 7:29 on the Australian album but was faded out early to 6:57 on the international version. This means they trim off the Chuck Berry licks and title chanting to the end. However, both these full length versions were restored on the 1994 Atco Records remastered CD of the international album. The most recent 2003 CD edition by Epic Records goes back to the edited versions, as originally on the 1976 and 1981 international vinyl editions. The uncut versions of both songs were released on the 2009 box set Backtracks.

On the original version of “Rocker”, included on the Australian T.N.T. album, the song lasts 2:55 and cuts out abruptly as the guitar riff hits its peak. Conversely, all international editions of the “Dirty Deeds” album have a slightly shorter version where the song fades out at 2:50 before the cut. “Squealer” appears to be longer by thirteen seconds on the international version; this is due to it having a bumper of silence at the end, as it is the final track on the record. “Ride On” has a four second difference (longer on the international version) which appears to be from a minor speed issue, although the last guitar slide can be heard better on the shorter Australian version.

The Australian version of the album was briefly released in the UK, but only on the original vinyl printings in that country.

“Jailbreak” was included on AC/DC’s ’74 Jailbreak EP, released in October 1984 in the United States, Canada, and Japan.