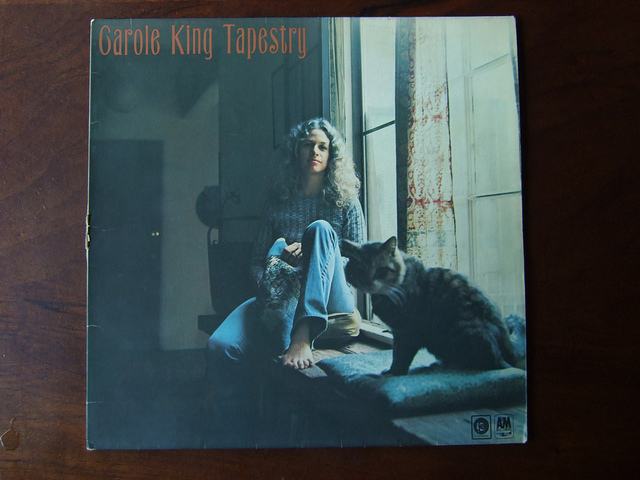 Tapestry is the second album by the singer/songwriter Carole King. One of the best selling albums of all time, it was released on February 10th 1971.

King began her singing careerin the late Sixties writing songs for other artists including the hit single ‘Will You Love Me Tomorrow’ for the Shirelles. King divorced from her songwriting partner and husband Gerry Goffin in 1968 and struck out on her own to pursue her own singing career.

King released the moderately well received Writer in 1970. King met American singer/songwriter James Taylor who encouraged her to really push herself for the follow-up album and sing some of her songs she had written for others. King found she already had a successful back catalogue and returned to the hits she had written previously.

This decision proved successful as King included ‘Will You Love Me Tomorrow’ and ‘(You Make Me Feel Like A) Natural Woman‘ which had been a hit for Aretha Franklin. Critics enjoyed the relative simplicity of the album and voted it Album Of The Year in the Grammy’s the following year. The album also introduced the world to ‘You’ve Got A Friend’ which would be a hit for King’s friend Taylor.

The album is reported to have sold 25 million units worldwide and has been named 36th in Rolling Stone’s 500 Greatest Albums Of All Time.

You Can Listen To Rod Stewart’s ‘Every Picture Tells A Story’...