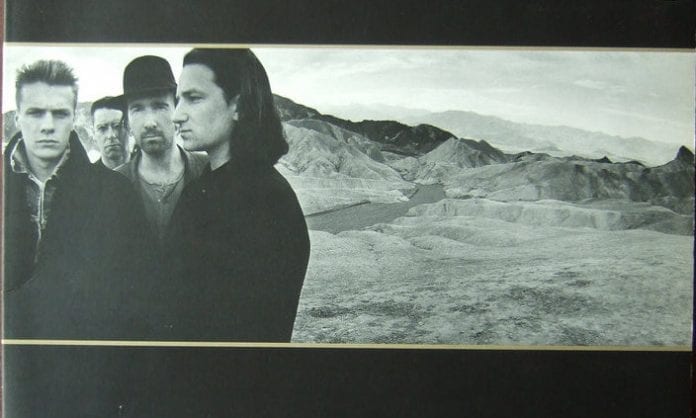 The Joshua Tree is the fifth studio album by U2 and was released thirty years ago today, on the 9th of March, 1987.

U2 fans are in for a real treat today; you will be able to ask the band anything about the eleven songs on the album and the subsequent tour which saw them playing stadiums for the very first time.

Which was the song that nearly made it?

What was your personal highlight of 1987?

Which one song proved the biggest surprise?

It was the album that launched the band into the spotlight with their three massive hit singles ‘I Still Haven’t Found What I’m Looking For’, ‘Where The Streets have No Name’ & ‘With or Without You’.

Using the textured sonics of The Unforgettable Fire as a basis, U2 expanded those innovations by scaling back the songs to a personal setting and adding a grittier attack for its follow-up, The Joshua Tree. It’s a move that returns them to the sweeping, anthemic rock of War, but if War was an exploding political bomb, The Joshua Tree is a journey through its aftermath, trying to find sense and hope in the desperation.

That means that even the anthems — the epic opener ‘Where the Streets Have No Name,’the yearning ‘I Still Haven’t Found What I’m Looking For’ — have seeds of doubt within their soaring choruses, and those fears take root throughout the album, whether it’s in the mournful sliding acoustic guitars of ‘Running to Stand Still,’ the surging ‘One Tree Hill,’ or the hypnotic elegy ‘Mothers of the Disappeared’.

So it might seem a little ironic that U2 became superstars on the back of such a dark record, but their focus has never been clearer, nor has their music been catchier, than on The Joshua Tree. Unexpectedly, U2 have also tempered their textural post-punk with American influences. Not only are Bono’s lyrics obsessed with America, but country and blues influences are heard throughout the record, and instead of using these as roots, they’re used as ways to add texture to the music.

With the uniformly excellent songs — only the clumsy, heavy rock and portentous lyrics of ‘Bullet the Blue Sky’ fall flat — the result is a powerful, uncompromising record that became a hit due to its vision and its melody. Never before have U2’s big messages sounded so direct and personal.

The band are then hitting the road this summer to celebrate the 30th anniversary of their Joshua Tree album. The tour will kick off in Vancouver in May, and then head to the US before coming to Dublin for their much anticipated Croke Park concert, on 22nd July. The Dublin band will be supported by Noel Gallagher’s High Flying Birds during the European leg of the tour, which includes the band’s Dublin date.

1. Where the Streets Have No Name

2. I Still Haven’t Found What I’m Looking For

3. With or Without You

8. Trip Through Your Wires

11. Mothers of the Disappeared

You Can Listen to The Beatles’ ‘Sgt Pepper’ In Full From...

The Classic Album at Midnight – The Beatles’ Sgt. Pepper’s Lonely...