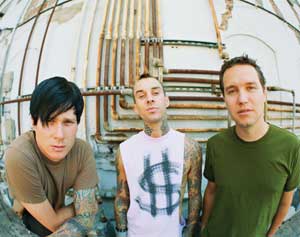 Blink 182’s guitarist-vocalist Tom DeLonge, says the band are recording their new album, although they’re working on it in an  unconventional way.

The Californian rock trio hope are planning to release the new material next year, hopefully in the summer.

Back in July, DeLonge posted a photo on his Instagram page with the caption: “Rehearsals start today… And yes there will be a new album #SorryForTheWait #Blink.”

The Blink lads didn’t deliver the news through a boring press release, instead the singer posted the following photo on Instagram. It shows the three band members rocking some dubious teenage hairstyles (we’ve all been there).

Speaking to Gigwise, DeLonge says: “I’m not totally sure how it’s going to work but the goal is to find an area or an environment that’s different and not just a normal studio.”

“I think if we can pull off those few things we’ll be in really really good shape. We’ve always done what we liked, and on the ‘Untitled’ record there was a lot of debate where we thought our fans wouldn’t even like it, but I think we succeeded by sticking to what we wanted to do, and it turned out to be the one that the fans like the most.”

The frontman also discussed the 15th anniversary of Enema Of The State. “I just knew it was our best record. We [came] out with this record and out of nowhere, the label goes, ‘Holy f**k, there’s something here’. It caught them by surprise.”

The rock trio were the headlining act for the Reading and Leeds Festivals earlier this summer. Tom Delonge put out an album with his side project Angels & Airwaves at Halloween.