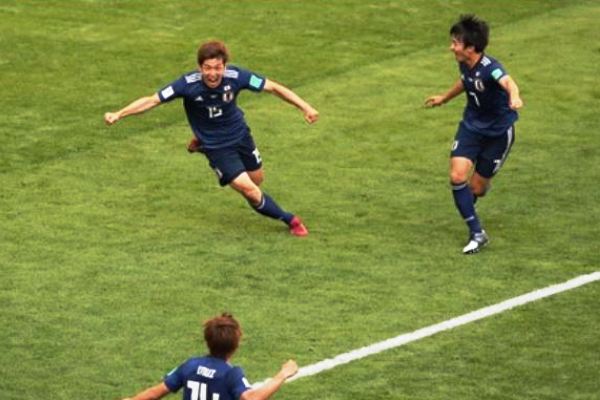 Japan secured a famous World cup win against a 10 man Colombia in their Group H opener in Saransk. Colombia conceded a penalty and had Carlos Sanchez dismissed inside three minutes for handling Shinji Kagawa’s shot at a goal left exposed by terrible defending.

It was the first red card shown at this World Cup, and the second fastest in history at two minutes 56 seconds. Japan wasted fine openings and were eventually punished when Juan Quintero’s clever free-kick, fired low under the jumping wall, brought the south American side level six minutes before the break.

Colombia had never before come back to win a World Cup match in which they had conceded the opening goal – across 10 games – and star player Rodriguez was brought on in the second half, the Bayern Munich attacking midfielder having been deemed not fit enough to start.

But instead it was Japan who regained the lead, Osako finishing with a header from Keisuke Honda’s corner. Rodriguez had been struggling to leave a mark on the game, with Japan at last making their extra man count and dominating possession as might be expected, but there would be one big chance late on.

This was the first time Japan had won a World Cup game on European soil, and the first time they had beaten a side from South America at the tournament.

For Colombia, a team who reached the quarter-finals in 2014, this was a miserable defeat that leaves them with two very important games against Poland and Senegal to come.

“It is tough to lose a player so early, especially one so important. Despite that we came back in the second half. But with Japan having an extra player, it was very hard to recover possession.”

👉 Yuyo Osaka's goal was the eighth headed goal at the 2018 FIFA #WorldCup pic.twitter.com/qLTFkwsiJM