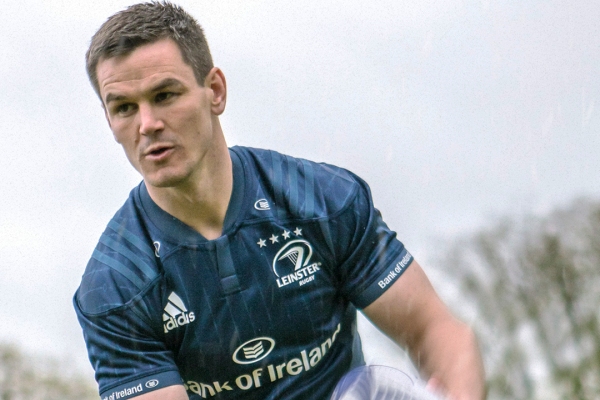 Johnny Sexton has been passed fit to play in the Heineken European Champions Cup tomorrow.

Sexton has overcome a calf injury to retain his place in the Leinster team to welcome Bath to the Aviva Stadium with over 43,000 tickets sold.

Rob Kearney drops out as one of three changes to the side that won in Bath last week. Jordan Larmour switches to full-back.

There are three changes in total from last weekend’s win over the same oppostion as Adam Byrne, Rory O’Loughlin and Jack Conan all come into the starting XV.

After their 10-17 win at Rec, Leinster will hope to further close the gap on Pool leaders Toulouse, while Bath need a win to retain an interest in the competition.

There is a change in the back three from last week. Jordan Larmour moves to full back from the right wing with Adam Byrne coming in. James Lowe continues on the left.

There is also a change at number 12 jersey with Rory O’Loughlin starting alongside Garry Ringrose for his 50th cap.

It’s as you were in the half-backs with Luke McGrath again partnering captain Johnny Sexton.

There is only one change in the pack so it’s as you were in the tight five with Cian Healy, Seán Cronin and Tadhg Furlong in the front row and last week’s Heineken Man of the Match James Ryan again partnering Devin Toner.

With Dan Leavy moving from No. 8 to the blindside, Jack Conan comes in at the back of the scrum with Josh van der Flier continuing at openside.

Serena Williams Ends Career With Loss in US Open